A Havan for Trump 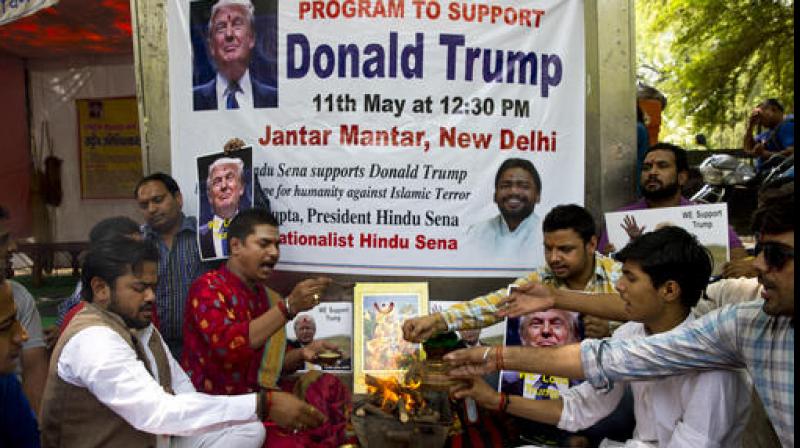 Nobody should be surprised that the Hindu rightwing supports Donald Trump. That they are bizarre, too, is a known fact. Adding to their weird tactics, the Hindu Sena held a special havan (prayers propitiating gods before a fire) to ensure that Donald bhai wins the US elections.

They placed him along with icons of their holy deities. They seem to have found a common enemy in Muslims. The founder of the group, Vishnu Gupta, said: “The whole world is screaming against Islamic terrorism, and even India is not safe from it. Only Donald Trump can save humanity.”

There is a banner along with the revered gods declaring as much. Aren’t these the same people who claim an ancient heritage that includes having made the first discoveries of planets, rockets, and math and science? Don’t they declare that Hindu heritage supersedes all cultures? How are they, then, relying on a capitalist who has just come on the scene?

The reason is simple. They are outsourcing their own insecurity.

A few months ago a man called Kristopher Allan from the far-right group Scottish Defence League was out in the streets declaiming, "f*** off refugees" and "Allah is a paedo". Reports coming in reveal that he is a sexual offender and a paedolphile. This sort of projection is common, for negativity seeks its own reflection.

It is precisely why the Hindu Sena is holding on to Trump for dear life. He is mirroring their hate.

However, besides appearing ridiculous performing that ritual for Trump, they are insulting the culture they seem to claim to revive. But, then, their behavior and expression are a daily assault on the culture. Let us also not, never, forget that it is such organisations that have killed rationalists in the past couple of years.