The Defence Minister as Local Bully 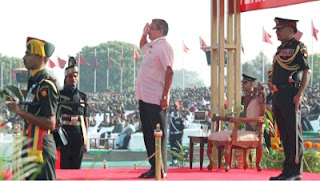 Did the Defence Minsiter of India have to sound like a gully bully to make a point about the rightwing version of patriotism?

Unfortunately, his lesser crime is being highlighted and not the one that's truly dangerous.

Let's get done with the lesser one first.

He took a potshot at actor Aamir Khan's comment sometime last year about his wife feeling insecure about living in India anymore. One may or may not agree with such sentiments or their expression, and the canny Khan almost took back all that he had said, but dragging it in reveals a gameplan. And that gameplan is to ensure that those who critique the government are boycotted. Aamir lost his endorsement deal with Snapdeal and Parrikar said, "Some of our people are very smart, I know. There was a team which was working on this."

The Defence Minister is admitting that the BJP has a team that will see to it that your work and livelihood can be snatched from you if you utter a word against the government or the country: “I am only trying to point out…if anyone speaks like this, he has to be taught a lesson of his life. That was a very arrogant statement, we have to love our nation.”

The BJP has been in power for barely two years now and the party's supporters have shown us just how much they love the nation by stilling voices — verbally or by putting an end to the owner of the voice.

Randeep S. Surjewala, spokesperson of the Congress asked, "Can this be the 'Raj Dharma?" Under no circumstances must this become common lexicon. The Indian republic does not need any such terminology. We have had enough references to epics that, in a sense, confirm the Hindutva Rashtra dream.

What is far more worrying is that Parrikar has justified the use of force and weapons by the armed forces with the taunt, "I do not want to train the Army to use the lathi." Earlier this month, following the killing of Burhan Wani in Kashmir, the police and the army used pellets that grievously injured and blinded civilians. This goes against every norm of civilised society, not to forget human rights abuses.

The army knows how to use the lathi when forcing out confessions. There is nothing innocent and tame about the lathi; the person who holds it wields control. A mob running amok pelting stones in anger is often first shown the lathi that transmogrifies into a gun. Perhaps, it is a gun already.

In sensitive areas, the Army is used as a political tool. That is as far as a civilian decision is concerned. But if you arm the Forces with teeth and the power to use weapons at any time, then it is about militarising a region and not for civilian support.

When called upon in civilian areas, the job of the Army cannot be to shoot at sight but to maintain the peace. It should also have mastered target training and not hit at random people, including children. One major had the audacity to ask on national television, "What was a child doing there?"

Children, women and men are free to roam the areas. Even if some militants occasionally use them as shields, the figures of killings just do not add up.

More importantly, it is time ministers stopped using organisations to promote patriotism politics. The person who is killed on the land he tilled and lived off had a very close association with and love for it. Every individual who lives in the country is a nationalist, especially the one who wants the betterment of the country and questions it.
By Farzana Versey at 7:35:00 pm