The Naked and the Political 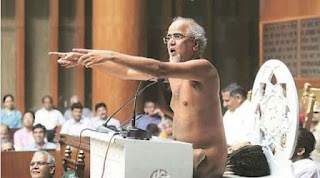 A naked man addressing politicians in the assembly should raise eyebrows. But in India this is cause for reverence. It is the same India whose moral police has problems with the way people dress up.

So why is it okay for Tarun Sagarji to be nude before MLAs at the Haryana Assembly, discussing subjects ranging from female foeticide to Pakistan? Because he is a monk of the Digamber sect. This sect believes in being 'sky-clad', and one accepts the different forms of worship and the reasons for it.

However, one does not see other Digamber Jains go around without clothes. Besides, if it is the Muni's religious uniform, then he should be adhering to it in the religious confines. The Assembly is not one. Religious figures of various stripes should not even be permitted in these halls, let alone become political leaders, as indeed some are.

The whole point of abstaining from clothes is to divest oneself of comfort and arrogance, of specific markings and attachment.

Would these ministers listening to him in rapt attention offer the same respect to any other member not clothed according to their moral prism? They would be sniggered at, and if a woman we to dress 'inappropriately', whatever that means, then she would be objectified.

As happens often, much of the reaction is not to the monk, but to a response to him. Music director Vishal Dadlani is said to have "mocked" him when he posted on a site: "If you voted for these people, YOU are responsible for this absurd nonsense! No #AchcheDin, just @NoKachcheDin ."

He belongs to the Aam Aadmi Party, and his chief Arvind Kejriwal was quick to say: "Tarun Sagar ji Maharaj is a very reverred saint, not just for jains but everyone. Those showing disrespect is unfortunate and shud stop" and "I met Shri Tarun Sagar ji Maharaj last year. Our family regularly listens to his discourses on TV. We deeply respect him and his thoughts."

Ideally, Mr. Kejriwal should be questioning religious people being in a political space. But, he is himself at the mercy of them. Nobody should care what he or his family personally believe in, but by stating it as a response he conveys clearly that he is a part of the rotten system. Vishal apologised and says he will quit politics.

We cannot blame only the Hindutva parties, for even the secular ones kowtow to religious leaders from every faith and use them to influence the electorate even though they have precious little real influence.

I am not against religion or anybody practising it. We all need spiritual sustenance (and not everybody can handle their drinks well!), but, seriously, god is in her/his heaven and therefore perhaps nothing is right with the world.

Speaking of which, this photograph of Olympics winning athlete P.V. Sindhi on her way to thank the deity. Again, this is personal. 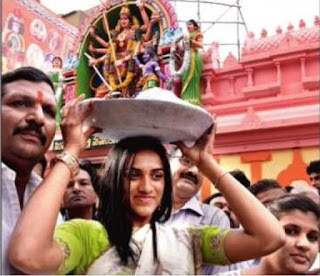 But India's showing at the Olympics is not something to crow about. The few exceptions only underline the apathy. Besides, the athletes have complained about neglect and paltry conditions. It is their talent alone that stands with them despite everything.

If they think the talent is god-given, then it should be looked after by the gods too. Or at the very least the gods should do something about Indian officials.

Indians are big on 'mannat', asking for favours at various shrines and dargahs. In that sense, we are all greasing palms, if not of babus then babas.

Speaking of babus and government servants, here is Madhya Pradesh chief minister Shivraj Chouhan carried by policemen when he was on a tour of flood-hit areas in his state. Was the water too wet? 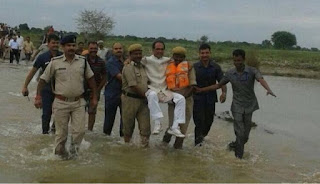