The Murder of Muslims 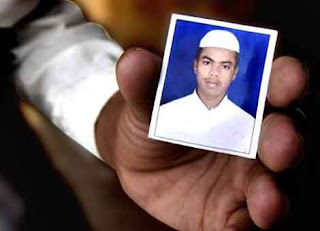 In India today, nationalism has a religion. Hinduism. We may pussyfoot around it and refer to it as Hindutva, saffronisation or, what the ruling rightwing Bhartiya Janata Party calls “fringe elements”, but the discourse is clearly embedded in the faith of the majority community.

Slurs against Muslims have become commonplace. A country that wants to declare the cow as the mother of the nation and where minorities have to prove their patriotism not by allegiance to the flag but to the political party in power is bound to descend into chaos.
Two years ago, a mob brandishing hockey sticks and knives barged into Mohammed Akhlaq’s house in Dadri in north India and assaulted all the family members before killing him because they suspected there was beef in their fridge. The meat was sent to the forensic lab and it was found to be lamb.
When one of his killers died (of natural causes), he was given a martyr’s funeral; his coffin was draped in the national flag and there were speeches by leaders from Hindu organisations that have direct access to the government.

Last month towards the end of Ramadan when Junaid boarded the train to return home with his Eid shopping bags, he might not have imagined that the elderly man whom he offered the seat to would egg on a mob punching him and his friends. Abuses flew. “Beef eater”, “antinational”, “mullah”. They pulled at their skull caps and newly-sprouted beards. Knives came out telling them to go to Pakistan. They were bleeding. Nobody came to their rescue. Junaid was stabbed. He died. He was 16.

At the stations en route some of the lynch mob got off, enough to let the cops shrug about little evidence.


A scuffle for seats got transformed into a fight for political and religious space. Or, perhaps, religious assertiveness is seeking out reasons.
Meat trader Alimuddin Ansari was beaten up by a mob and his van, ostensibly with cattle meat, was set on fire in Jharkhand. There seemed to have been a dispute with some people who were extorting money from him. Such excuses have become the norm where the victim is invariably Muslim, for it was not a spontaneous act. His movements were tracked for hours before he was murdered.
Mohammad Majloom and Inayatullah Khan of Latehar were taking their cattle to a fair many miles away. Five men with a mission waylaid them. After they killed the 35 and 13 year old, they tied a noose around their necks and hung them from a tree.
“Prima facie it appears to have been a case of a gang attempting to loot cattle,” the cops said. For those in a hurry to rob and make a quick escape with the cattle to profit from it, they seemed to have relished in committing the murders. Not only did they kill the two, they hanged them. The hanging was a message. To shame. To hold them up as an example. How dare they not respect their gau mata, the cow mother, their religion?

It is disconcerting that mobs are using cow protection as the higher cause even to settle petty disputes. The shaming has got a further boost because the videos are uploaded and shared. The message gets more traction. What is so evident in these viral videos is that the so-called ‘jihadi mentality’ that Muslims are accused of does not respond in kind. The victims are just overwhelmed by the suddenness of the attack; in some instances they are pleading, in one the man does not even have the energy or presence of mind to protest as they grab his hair and kick him. He just takes it like a stoic who has become accustomed to lie on a bed of nails.
***
Narendra Modi, the prime minister of India, has not uttered a word condoling any of these deaths. He tweets mourning for the loss of lives in a fire in Portugal, but makes no attempt to reach out to the families of those killed by men purportedly supporting his party’s Hindutva dream, a dream to reclaim ancient India and transform the country into a Hindu nation.
When he does speak, it is evasive: “All (state) governments should take stringent action against those who are violating law in the name of cow protection.”
How will this happen when some state governments are handing out expensive beef detection kits to the cops to smell for trouble, effectively converting the police force into cow protectors too? The very fact that there are several cow protection groups is worrying, for they aren't animal rights activists but soldiers of the faith.
“Bolo Jai Shri Ram” (Hail Lord Rama), is the war cry. People are stopped in the streets and asked to owe allegiance to their god. A mentally unstable woman was slapped and forced to utter the words; a cleric was pummelled just outside the mosque by a group insisting he chant the phrase; journalist Munne Bharti was driving with his elderly parents. Suddenly, their car was surrounded by a group. They threatened to set the car on fire if they did not chant “Jai Shri Ram”. They did. An adult was frightened, for himself and his aged parents.
*** 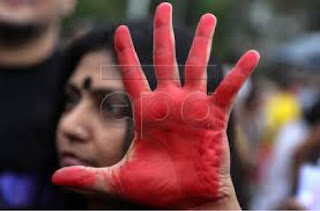 How is this not about religion, then?
It was always about religion, perhaps by a few skewed minds. 25 years ago Bal Thackeray, the leader of the militant Shiv Sena, had asked for the disenfranchisement of Muslims. He would address huge rallies at an open ground referring to Muslims as “katuas”, the cut ones without a foreskin. After the Babri Masjid was demolished in Ayodhya, on the instructions of these political parties, and the riots reached what was then Bombay, the men in the streets would point at the crotches of Muslim men and snigger, “katua”. They were stopped and asked to strip for a random check by random people. Unlike the Sikhs after the riots in 1984 who discarded their turbans and shaved off their hair to protect themselves, Muslims could not get back their foreskin.

At the All-India Hindu Convention held last month in Goa, for 4 days all the cars at the venue were sprayed with cow urine to purify them. “Their car needs shuddhi karan. We do it to all objects — watches, clothes, sometimes even handbags. It’s a spiritual exercise.”

How people choose to practise their faith is a personal matter. But when you have a cow piss soda, cow dung and urine being made a part of ayurvedic medicines and astrologers treating people in hospital OPDs, then it becomes obvious that the cow and beef are incidental here. They are only the more potent batons to beat the minorities. There is also the commercial angle. Giving a charlatan guru called Ramdev land and business rights to run an empire ostensibly selling indigenous products is a strategy to bring the devil close to your home.

Young Hindu women are training in self-defence to protect them from “love jihad”, a bogey created by the rightwing suggesting that Muslim men are luring them to fall in love to later convert them.

In May last year, there was a report about a camp in Uttar Pradesh training the youth wing of militant Hindu organisations to protect the country from terrorists. In the video images they are aiming their air guns and sticks at men wearing skull caps. The governor had justified the drill: “Those who cannot defend themselves, cannot ultimately defend the country and there is nothing wrong if some youths are getting arms-training purely for self defence.”

That instead of urging these fit youth to join the army, they are being brainwashed to target a particular group makes the intention clear.

How is this not about religion?

The fallout of such brainwashing is not restricted to the extremist Hindutva proponents alone. There is a not-so-subtle attempt to deflect from the Hinduness of the terror by liberals too. An academic who has taken it upon himself to explain India to Indians on social media from his perch in the US has written about the global Muslim victimhood industry by playing victim: “One cannot use the term ‘Muslim terror’ (but Hindu or Christian or Left terror is fine) or even Islamic terror without worry of being termed communal, bigoted, or Islamophobic. The appropriate phrase is 'Islamist terror,' which, we are expected to clarify, has nothing to do with Islam.”

Some commentators have begun to call India Lynchistan, the land of lynching. We do not seem to realise that mobs thrive on notoriety. They are not seeking a popular mandate, because they already are the popular mandate. Paper tiger responses only embolden their cause. The truth is that nobody in mainstream media or in activism or with an outsider’s perspective, like Dr. Amartya Sen, has had the courage or the will to call these planned lynchings as Hindu terrorism.

Is such nomenclature important? It is. Because it is a systematic attempt to annihilate the minorities, specifically Muslims. (Quite different from Islamist terrorism whose victims are mainly Muslim and, in some cases like the ISIS’s victims, also people who are liberal enough to support Muslims.)
Muslims immediately distance themselves from any jihad violence, even though that does not assuage their neighbours from seeing them as potential suspects. Hindus are not doing so in large enough numbers, and they are chary of admitting the faith angle because they believe that Hinduism is not a monotheistic faith with allegiance to one book and one god. It is amorphous and therefore fluid, they reason.

The caste system and its treatment of Dalits and the backward castes certainly reveals ‘fluidity’. All the government-engineered riots have been masterminded by a vile intellect that outsources the war to the police and army and pumps up the trading class to decimate minority businesses. The murder of minorities is only a more violent assertion of this sheltered ghettoisation of the elite majority.

There are many who use their internet liberalism to rationalise their own subtle bigotry. That many of them also have a stake in steak does lend weight to their public “I'm not too Hindu” utterances.

In one such recent piece, the headline flashed about how Hindu victimhood is a manufactured cry. In the first para itself, though, the writer gave a clean chit to Muslims quoting, of all people, George Bush: “India is a country which does not have a single al-Qaida member in a population of 150 million Muslims.” Hindus do not have to prove whether they have allegiance to any extremist organisation, even if they elect them to power.

The usage of Islamist phrases like fatwa and jihad to explain Hindu terror acts and suggest they are only “mimicking” reeks of another version of Islamophobia and projects violence by Hindu extremists as a reaction to centuries of abuse by Muslim rulers. This historic narrative pushes the ‘tolerate Muslims despite their past’ idea, the moral compass revealing who considers itself the superior side.

These recent attempts to call out Hindu extremists is not organic. They are a response to some of us wondering why we did not link the Hindu word with terrorism. We have woken up or, in good old Hindu speak, and in deference to many of us being converts from the ancient religion, our third eye has been awakened.