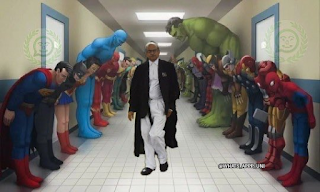 The celebrated lawyer has refused to apologise after a Supreme Court bench held that a couple of his tweets constituted a contempt of court.
Hungry for part-time heroes, social media declared him one; a WhatsApp image showed several fictional superheroes bowing to him as he walks past, head held high. This case has now transformed into performative art, with its exaggerated portrayals. Bravado is perceived as bravery and privilege as persistence.
Read full article here
By Farzana Versey at 11:02:00 am