Venus and the Penis 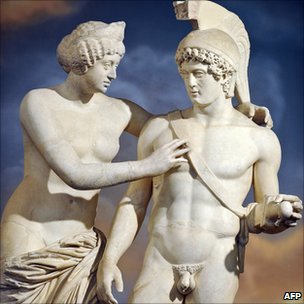 The purists are puking. Venus has got a hand job and Mars can now boast of a nice little phallus. These ancient statues did not have the relevant body parts and had lived without them since 175 AD. Come end of 2010 and Prime Minister Silvio Berlusconi has got them ‘restored’. This is not restoration. Any art work that had been altered from the way it was created is tampered with; restoration is a skill that stays pretty much loyal to the original.

The Italian PM is not known to be prudish, therefore these cosmetic additions seem surprising. Perhaps it has to do with the human idea of completeness. If he has to walk into his courtyard everyday, where the works are placed, and see a beautiful couple – the woman handless, the man penisless – perhaps it bothers him.

This raises the question about the perception of art in reality. What might be considered handicaps in life are often metaphorical or aesthetic statements in art. The license to distort is endemic in creativity. Unfortunately, such distortions in creation are looked down upon and rebuked.

Would the connoisseurs of such cut-off parts look upon people born with such disabilities as ‘complete’? I doubt it. I can claim to have an ‘eye’ and I understand at least to some degree the value of symbolism. My own conjecture about the handless Venus is to emphasise her beauty, exemplified especially in her other statue where she is lying in repose, curves accentuated, to concentrate on the feminine and only the feminine. A hand is genderless, so to speak. Regarding Mars, the god of war is probably considered so powerful that he can fight without a sword; his potency is not dependent on specific weapons.

Berlusconi has meddled with a work of art, but it is not unusual if we see it from the perspective of how art is perceived. The manner in which certain goddess figures have been decorously draped in our own temple sculptures, there has always been a progression-regression battle as to what is considered timely and timeless. What about the attempts to destroy certain works, maim them? Aren’t ruins a testimony to it?

There is in the realm of art also the question of how the real are portrayed. It is different from mythological figures. Do portraits of royalty necessarily reveal them as they were? What about the many ‘subjects’ that get iconoclastic status simply because they have been given a buildup over the years? Who were the people in Picasso’s distorted images?

Isn’t truth fabricated when famous works are replicated? Why, when a canvas is put behind fortified glass it loses much of its texture and becomes a mere desirable object. So, the purists need to ask and answer a few such queries. Meanwhile, since these parts that Silvio has ordered to be added are detachable, is there any scope of them being enhanced or inflated? Just wondering…
By Farzana Versey at 5:34:00 pm