The house that Bin Laden Built? 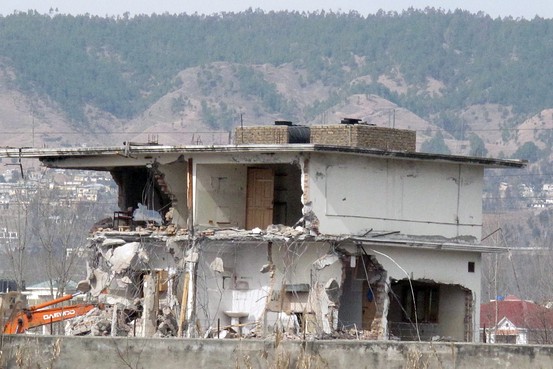 The 'mansion' has been razed. But ghosts need no houses.

According to the Wall Street Journal:

"Pakistan authorities demolished the three-story house in Abbottabad where Osama bin Laden lived for years and died last May during a raid by U.S. Navy SEALs in an apparent bid to stop it becoming a tourist site or shrine for al Qaeda supporters..."

We are told this is a decision taken by Pakistani security agencies. The US has not been informed. One has to be naive to believe this. True Pak-US relations are at a low after the November killings of 24 Pakistani soldiers, but this is a ruse.

Osama was the most wanted man. The US hunt for him took them on a warpath, resulting in thousands of deaths. If he lived here for five years, and in that quick operation they managed to take away "boxes of materials", does it mean the safe house has no value for them anymore?

They say that the proximity to the military academy is an embarrassment to Pakistan. Pakistan says it did not know about it. As for America:


"Until now, however, the U.S. has stated it has found no evidence that Pakistan's military or government helped shelter the former al Qaeda leader."

So the soured relationship theory just does not work. The whole tourist attraction-shrine idea is lame, too.

The US killed the image of Osama.

Pakistan is helping it to demolish every trace. It is a mutual understanding. For a country that revels in symbols, it is hard to imagine the US did not want to keep a watch over the site and just move on after the burial by the sea.

Something more than a building is destroyed, and America jolly well knows what that is.
By Farzana Versey at 12:21:00 am