...and the rest of India wants to be foreign
It is shameful that the chief of a ‘nationalist’ group, the RSS, feels that India was better off during British rule. Isn’t the RSS always crying itself hoarse to protect our heritage even if it means asserting it through violence? 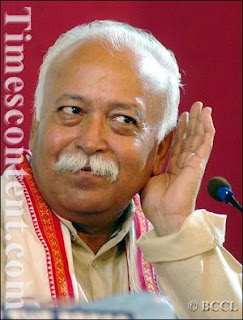 "After Independence, the dominance of rich and powerful people in politics and rising inflation have worsened the country's situation, which is worse than what it was during the British rule. All political parties were in power some or the other time during the last 64 years since Independence, but the situation has not improved. Hence, citizens must introspect over what went wrong."

There were rich and powerful princes and even business houses during British rule; they were protected depending on how loyal they were. In that, nothing has changed. How is it worse? Development strategies are now the burden of the Indians in power; during British rule, the wealthy did not have to worry about these issues. They lived in their principalities and worked in what may be charitably called an obsequious federal structure.

The situation of the poor was as bad, if not worse. At least on paper today one can question concepts of slavery and bonded labour. The colonisers, in order to avail of chattels, permitted the brown sahibs their indulgences as reward for fidelity.

It is a bit strange that the RSS that was formed to protest against British rule is now singing its praises. Stranger still is the confusion. Mr. Bhagwat states:

So, what language were the British promoting? How foreign is a language that is constitutional and, more important, just how many people know that language? This is hitting out at straws. Most people learn their local language, and education has to be broad-based. The concept of the ‘mother tongue’ is limiting, and inherited. Listening to lullabies in it is fine, but what beyond that?

Mr. Bhagwat does come to the nitty-gritty:


"Even 64 years after Independence, India is being threatened by China and Pakistan. With rising concerns over internal security, we should give top priority to military education to students to make India strong.”

Obviously, during British rule we had no threat from Pakistan and China. The colonisers were the internal threat. Did Indians have military training then? Except for some of the rebel armies and the revolutionaries, the battles were fought with passion and little else. What we are faced with now are security issues that have to deal with diplomatic ones as well. While there are border disputes, the governments are also talking about other things. There is insurgency, but neither of these two countries will ever colonise us.

Military education would entail the power of procuring licensed weapons. How many such students will make India strong? Why not encourage them to join the army or other legitimate combat forces? Do we want a militarily equipped country without any other form of education? What has the RSS done for India with all the training it gives its members in the camps?

It is pertinent, though not surprising at all, that Mr. Bhagwat makes no mention of the terror within and the several states and groups at war for space and identity.

I’d like to digress here about this attitude towards what is foreign. It has to do with our utter contempt for what is indigenous. Even parties that talk about our culture and fight petty battles against westernisation want to be like others. UP Chief Minister, through a leap of faith and imagination, thinks Lucknow is like Paris. With those granite pedestals and statues in different materials, this would not even qualify as kitsch. That aside, does Lucknow not have a fine culture of its own? What about those nukkads, the food, the weaves, the ambience?

The whole of India is in rapt attention over the elections in that state and we have to listen to this tripe about a local Paris. Imagine what would happen if Sonia Gandhi were to say that Amethi is like Sicily, or Delhi like Rome, or Mumbai like Milan? Her foreign origin would be skewered yet again.

Obviously, it does not make sense. But, from the lakes in Nainital to the backwaters of Allepey, we are Venice. Mumbai’s leaders want it to be like Singapore or Shanghai, depending on what noodles they prefer.

Can’t we have some pride in what we are and what we can be? Weirdly, when it comes to marketing our filth for filthy lucre, we are quite ready.

The law is an ass, and it is donkeys that work. Perhaps the CJI should have considered the fact that the best horses run races, and hermits live by ‘absenting’ themselves. It might have made more sense if he flipped his statement. Let them work like hermits – sparse with no strings attached, and live like horses – always in a ‘stable’ position wearing blinkers occasionally.