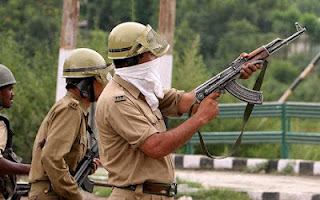 Until such time that Muslims will get arrested even before they are proved guilty, that there will be a huge number of undertrials, that after years their innocence will be proved after they are socially tarnished, at least those who need to be protected should be. But is it easy?

The Committee, which was constituted on March 9, 2005, under the chairmanship of Justice Rajinder Sachar to prepare had suggested that it would be useful to have at least one Muslim police inspector or sub-inspector in police stations in areas having high concentration of Muslim population “not as a matter to eliminate discrimination but as an initiative to build confidence”.


“Simultaneously, no Muslims should be posted in low minority populace areas? And then we will have peace on earth?”

It is amusing. If we check the statistics, how many Muslim police personnel are recruited? Have there been cases of Muslim cops deliberately rounding up people from the majority community or non-Muslims for no reason other than ‘suspicion’?

There won’t be peace on earth by such demarcation. Ideally, there should not be any. But we do not live in ideal times. Whether it is jobs or housing, there is discrimination.

Therefore, I find the Sachar Committee’s use of the phrase “not as a matter to eliminate discrimination but as an initiative to build confidence” curious. If there is a skirmish between communities, why can the Muslim officer not intervene and call the bluff of such discrimination? Do poor Muslims – and they are the ones who usually end up in ghettos – need pillow talk by the cops to instil confidence that no Gabbar Singh is around?

In fact, to give the flip side, the cop being an employee of the state would be far too cautious about being correct, and maybe even agree to cop out for getting his quota of ‘hits’.

Besides, in slums local gangs run the show and demand protection money. As with other groups, there are some shanties with a concentration of Muslims. There are Muslim gangsters, too. Yes, many. Everyone knows that. They are protected by cops and politicians irrespective of religion. However, if the Committee’s report is followed then the tussle would become mandatory. The Muslim cop will have to prove his allegiance with greater fervour and instead of protecting the common citizens, he will be pulled up for not capturing criminals, which other cops don’t anyway.

Invention is the mother of necessity, as the saying goes. And like many sayings, it just might end up being a truism.
By Farzana Versey at 7:56:00 pm