Beyond Wisconsin: Page of Terror and Establishment Apathy 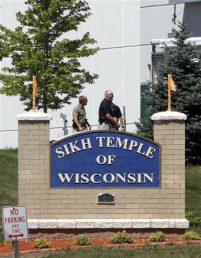 Page of Terror and Establishment Apathy
Beyond Wisconsin
by Farzana Versey
Counterpunch, Aug 7

“Nobody's angry here. We're just confused. Was this a random act? Was this directed at us because of the way we look?”
The questions were raised by an onlooker at the site of the Sikh gurudwara at Oak Creek in Wisconsin where six people were killed by a white man on the morning of August 5; he was shot dead by the cops.

Why is nobody angry? Why assume it might be a random act? What does the loaded “way we look” convey and why let it overshadow the terrorist attack? The FBI will conduct the investigations as a “domestic terrorist-type incident”, but for a large section of the media Wade Michael Page, a former sergeant, is a “lone gunman” or a “shooter”.

The motives are as clear as sun in a cloudy sky. It now seems that he was a neo-Nazi. In fact, civil rights groups go a step further and refer to him as a “frustrated neo-Nazi”. Was he frustrated with the ideology or was his frustration a spur to become one? This is a convenient back-up vague term to absolve mainstream terrorism.

To caricature him is easy, for the blueprint is ready and almost cool – balding man with tattoos, strumming the guitar with devilish music in an offbeat band called End Apathy. His motto to “stand proud and raise the white man’s flag” is confusing white supremacy with neo-Nazism. Both have different histories. Tanking up on the latter is a hands-off stance for internalised racism. The Nazi satan image gets props for also psychologically working on public memory as victimisation.

There is tardiness to investigate the possibility of a larger group’s involvement, a routine that is followed when the shoe in on the other foot and forces are deployed to trace leaders, assistants, handlers, trainers, foot soldiers.

The United States is home to 700,000 Sikhs. They are handed out certificates for being “a peace-loving community”, implying their innocence only by default, while the criminal’s antecedents remain enigmatic and diffuse the pattern of devious behaviour.

State Rep. Mark Honadel, whose district includes the temple, said, “Unfortunately, when this type of stuff hits your area, you say to yourself, 'Why?' But in today's society, I don't think there's any place that's free from idiots.”

That we are still battling with terminology to use for terrorists in some parts of the world reveals just how much semantics play a role in brainwashing people.

It includes the victims, who are hostage to the munificence of an all-embracing country. There is diffidence among non-westerners to talk about racism or what is now increasingly obvious as white terrorism.

This has two very dangerous consequences: It results in suspicion and infighting among different ethnic groups, and the claiming of tragedy points makes it possible for the ‘war on terror’ to continue as a sanctimonious bubble for the Western establishments.

The discussion on gun control is just one of the sidelights to obfuscate the issue. A person with a gun does not necessarily go on a killing spree. There are unlicensed weapons available. There are bombs and the use of more basic forms of ‘fundamentalist’ tactics. The latter can spread right from televangelism to a president sneaking into another country to bolster the morale of his forces that have no business to be there in the first place.

How do we deal with a “lone gunman”, a “psycho” and other such assorted creatures that are products of psychiatric superpower wards as opposed to an organisation that can conveniently, and legitimately, be called a terror outfit? Did a group pilot an airplane into the Twin Towers? Were we not told there was just one soldier who walked in the dead of night and shot down villagers in Afghanistan? Anders Breivik was alone when he killed 77 people in Norway. Kiaran Stapleton “kept smiling” as the court pronounced him guilty for the murder of Indian student Anuj Bidve in Manchester.

How individualist are they? Why do we not just say that there is another terrorism that does not need caves or a rugged terrain? Countries carry the baggage of history, of calamities, of attacks. The ruling elite do not have to muddy their hands to clear the rubble, so they muddy the minds of the citizens. The melting pot swirls the ladle and scoops out the good from the bad. It is an act so subtle that no one notices it.

It is left to the conditioned-to-feel displaced and mentally unstable white guy to carry the moral fable forward. He is like any recruit at a terrorist training camp. His ideology is not born in a vacuum. He is doing it for country. The political leadership will quote from the Constitution, but they have whetted the appetite for vengeance with rhetoric. Incidentally, the indictment of soldiers by some senior officers is an even more potent testimony of such lobotomy. Not surprisingly, Page’s six year stint in the US army during the 90s, partly in psychological operations” is mentioned prominently, even if he was demoted and quit the military with a “Less Than Honourable Discharge”.

Despite this, he comes across as a backroom loyalist. His 9/11 tattoo in many ways subliminally exonerates him. America has not allowed the world to live in peace ever since that day. One Sikh leader stated that it “implies to me that there's some level of hate crime there”. Another one wants “to educate Americans about diverse groups and act ‘to lessen this kind of rage’”.

A crime that should be seen in isolation has become communalised. It is, strangely enough, pluralism that has caused it – a pluralism where you may look and dress like Kim Kardashian or Justin Bieber but not like ‘natives’ like you. Instead of pushing for quick action and security, there is trepidation over “mistaken identity”, that some white guy might think you are someone from the al Qaeda. The chairman of the Sikh Council on Religion and Education believes: “There’s always an apprehension and a sense of fear that this kind of incident will take place anywhere, anytime.” 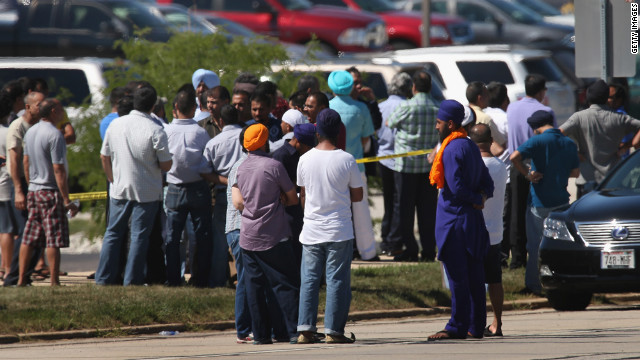 Can this not happen to others, too? Sikhs were killed for being Sikhs in their home country, India, where the ruling party conducted an operation inside the Golden Temple. Sikhs have had to fight for their right to wear turbans and to carry their kirpans, symbolic swords. Was there any al Qaeda then?

If 9/11 is being propagated as a definitive revenge-worthy date to flush out enemies, then will insurgency and terrorist attacks on some Indian states be seen as fallout of the Partition of 1947, and subsequent wars with Pakistan and China too?

Mitt Romney is concerned that the Wisconsin attack took place at a house of worship. This gives the crime another colour. Places of worship draw attention to the faith, more than to the community. But in the world outside America, there are sects, castes, sub-castes. However, in an alien land, a temple of any religion has more than emotive value. It represents an uprooted cultural identity.

There is already guilt by association. Pakistan’s liberals who berate those who sympathise with the plight of Muslims in Assam or Rohingyas of Myanmar instead of the Balochis in their own backyard are themselves reaching out to American Sikhs. The Peshawar ones are a forgotten story. 1984’s massacre of Sikhs is a fade-out for India.

The sense of urgency different communities feel to identify with such sorrow at the individual and group level is most certainly part of a larger political expression. Every such tragedy is about lost human lives. The need to emphasise it beyond the obvious is driven by a subconscious need for self-preservation and, as a consequence, actualisation.