People sit in an auditorium watching a wicked play. The jokes are vulgar; there is talk about the female anatomy and sex. What makes this one different? It is restricted to men only.

The reaction is that it is sexist. It is not. The director has not tried to hide intent nor the fact that “‘Only for adult men’ is my USP. It has worked. It is the first time in India, rather in the world, that such a tagline has been used”. Has it caused consternation because the characters are the regular sort?

We have shows for ladies only, be it for movies, plays or other cultural activities. Do women accompany their partners or male friends to dance bars, where men go to enjoy a few drinks and ogle at the dancers? How many women attend tamasha shows (a rustic and sensual dance performance loaded with innuendo) even in the villages where it is a staple form of entertainment?

How, then, can the playwright-director-producer Ashok Patole be put in the dock for “gender segregation” for restricting entry to ‘Ek Chavat Sandhyakaal’ (One Naughty Evening)?

He explained in an interview to Mirror:

“That is a matter of choice. Our play has adult material which, we think, is unpalatable for women. That’s why we do not wish to embarrass women, and also men. We were told by men to keep this a fun evening that they can enjoy. They claimed that they will not be able to laugh aloud at the sexy jokes if their wives were with them.”

It is shocking that he was asked whether women could not use the Indian Constitutional right to watch this play, when many women activists cry themselves hoarse over how women are portrayed. This is a closed group, and everyone knows that women too have their moments of fun. It has become quite the in thing in the metro cities for the ladies who lunch to invite a male stripper. The dynamics are changing, and although these are superficial indulgences there is no denying their usefulness as a form of social catharsis.It is beyond the male pattern Chippendales that advertises itself as :for ladies' entertainment'. 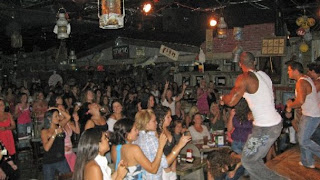 I remember watching a Dada Kondke film that was known for its rather crude humour in a small cinema hall. Curiosity about its filmmaker-actor was what prodded me. It was difficult to convince a friend to accompany me, to begin with. I was the only woman there and I could see that those sitting around me weren’t comfortable. We left mid-way.

The director, therefore, has a point when he says:

“If we had opened the play to everyone, and if some women had found it objectionable, our play would have been banned. We would have been labelled as porn-makers. Theatre-goers, who otherwise savour English sex comedies and Hindi bedroom farces, would have joined some women’s organisations, would have organised morchas against us. So, the marginal chance of doing well at the box-office would have been lost. We didn’t want that. And this tagline helped us put the play into perspective.”

This is way more honest than some ‘bold’ attempts at selling a film on the basis of making a feminist statement. Example being The Dirty Picture. Standard phrases like exploitation, empowerment, breaking the glass ceiling are used without understanding the import of these. Even the more offbeat feminist films and plays, without saying so, are indeed restrictive, in that they are catering to a female audience, have female sensibilities and make no attempt to market themselves for the consumption of men. A case in point being The Vagina Monologues, where the male, however aware and enlightened he might be, was a spectator. Unlike the woman as empathiser-observer.

This men’s only play has “two men talking about sexuality-related issues. A sexologist and a professor help a PhD student to analyze her subject: ‘Psychological, sociological and physical need of sexuality-related jokes and swear words’. It entails all those jokes that we chuckle over in private. We have just made those jokes public. What’s wrong in entertaining people? And we are not even involving people below 18. There is no malicious intent. I am a progressive director with a very broad openended view of sex and morality.”

That is the reason I find it intrusive that women would want to barge in. A female councillor after getting complaints – about what? That women could not attend a play they might find repugnant? – has muscled her way in and the shows will now have a new tagline welcoming the female audience.

I wonder if, as a matter of gender parity, they’d also use the men’s facilities.