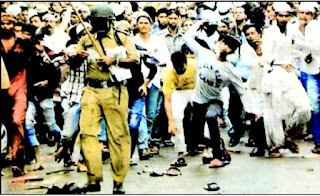 What does this photograph convey? It was on the day when a mob went
berserk at Azad Maidan in Mumbai.

Here the cop is coolly ambling ahead. What is he reading? Did he not realise there were people on a rampage right behind him? Did he turn to look back later?

He appears to be so immersed in something else. What is it?

This picture, despite it being in-your-face can have its layers unpeeled. Disturbing. Almost dark 'comedy', if it wasn't real.

Image is from TOI, but there was no photographer's name so not aware
if it's taken from elsewhere.
By Farzana Versey at 12:48:00 pm

Email ThisBlogThis!Share to TwitterShare to FacebookShare to Pinterest
Tags: callous, cops, mobs, my pic of the picks