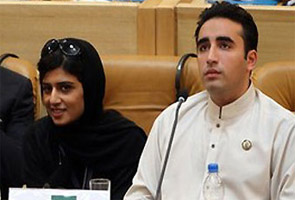 If it is gossip, then the consequences can be damning. It is about two powerful people. Hina Rabbani Khar is Pakistan’s foreign minister. Bilawal Bhutto Zardari is seen as the political heir of the Pakistan People’s Party. A Bangladeshi tabloid splashed a story about their affair. Besides an 11-year-age gap, she is married with two kids.

The Indian mainstream media, as well as non-mainstream avenues, have highlighted this bit of news. Hindustan Times front-paged it.

I do not see how it is any different from carrying a story on former Congress spokesperson Abhishek Manu Singhvi’s CDs or the daily dose of scandals, which include intimate medical updates.

The media has quoted from the story in the tabloid.

The Blitz mentions a greeting card Hina sent Bilawal on his birthday with a hand-written message: “The foundation of our relations is eternal and soon we shall be just ourselves.”

Despite Zardari’s tough stand, Bilawal is said to be adamant on going ahead with his plan to marry Hina. The tabloid claimed that Bilawal has even threatened to resign as President of PPP.

The Bangladeshi publication has been called “sleazy”. Had it talked about new terror training camps in Pakistan, do you think we would have seen it as suspect? It would be given the status of evidence. There is a platonic tone to the article, unlike what the tabloid press in the UK indulges in. Incidentally, Prince Harry’s nude pictures story as well as Kate Middleton’s did make it to our front page as news items.

Therefore, the Hina-Bilawal one is nothing to get stuffy about. While it is true that Indians will make a meal of anything Pakistani, do we accord similar respect to a Veena Malik or a Shoaib Akhtar? Why, a while ago there were rumours about Asif Ali Zardari’s affair with a lady in Canada. Bilawal’s own outings in London were splashed as news.

If a publication uses improper language or passes moral or any sort of judgement on this, then one may question it. Right now, we have a situation where the social media that invariably spills over into mainstream media is now judging the probity of such a move. Some well-known names have been repeating the story, only to say how wrong it is, not to forget even tagging Bilawal so that he knows that they are against it.  Does it not amount to wanting to be on the right side? Had both the individuals not been in positions of power, would the attitude be the same?

Recall how Imran Khan’s love child as well as Jemima Khan’s affair with Hugh Grant later became big news. If the current rumoured affair is a personal matter – and obviously it is – then we need to ask whether the media should continue to carry stories about industrialists’ families or actors and their private lives. I am talking about those that are on the front page where dirty linen is washed, property disputes, sex change, amount of belongings robbed, everything is delineated in disgusting detail.

We seem to get this call of the conscience selectively. I remember the insurance company ad with cricketer Yuvraj Singh. He had already shot for it before he went for his cancer treatment, but when it was aired some people found it offensive, insensitive, in bad taste. Now that he is back, the ad has changed. He speaks about surviving. He is as much a part of the game. Where is the recollection of concern over insensitivity now? The same happened when Aishwariya Rai Bachchan put on weight post-pregnancy and the pictures were online. People were full of empathy. “Leave her alone, she is a true mother,” seemed to be the chorus. Had she got back into shape soon after, these same people would have admired her for being a “yummy mummy” instead of letting herself go.

Replace these names with less known ones and they’d be toasted, if not dismissed derisively.

If the Hina-Bilawal story turns out to be true, it will be interesting to watch the reactions. I’d also like to see if there will be any op-eds doing a ‘sociological take’ on the matter of “privacy”. Therefore, everyone is culpable of adding to what they dismiss.

If it is false, or denied, the Bangladeshi tabloid will have to apologise at the very least. There will be theories about who planted it. It is possible that there could be political rivals or even a foreign hand behind it. The stories about the stories will keep the ‘non-story’ alive.