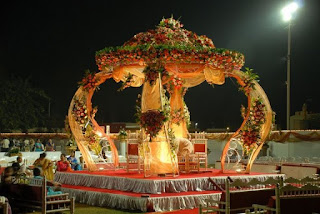 Weddings are probably occasions when people have every right to indulge in all their fantasies.

Around this time of the year, whenever I pass the Marine Drive stretch dotted with gymkhanas, there is opulence staring in the face. Elephants, apsaras, fountains, havelis…I once even saw a terracotta Venus lying in repose. How I wish they had a David standing over her. In bright daylight, all these decorations look forlorn, if not ridiculous. They are like discarded courtesans from another era. At night, with lights on, bedecked guests, music, they take on a respectable sheen.

It is not right to question anyone’s idea of a wedding. However, when I read about this, I was stupefied.I'll skip the names although they were on the front page:

One of the biggest weddings in the city in recent years saw...the son of city realtor tying the knot with the daughter of a business tycoon. The four-day wedding bash, rumoured to have cost around Rs 50 crore (over $5 million), attracted over 6,000 guests, including an A-list of celebrities ranging from industrialists and builders to film stars and politicians…

The celebrations spilled over to the next day with a bingo night and an array of games, with eye-popping prizes for the winners: Mercedes, BMWs, Audis, paid foreign and domestic holidays, besides other expensive gifts.

Almost all the guests were well-heeled. I find this rather downmarket. Affluent people carrying away keys to cars, envelopes with tickets to places they’ve been to several times. I would feel terribly insulted.

It is good to have games and fun. Take-away gifts have also become mandatory. This is just so much tosh. Avarice seems to afflict the elite more than anyone else. It is not just greed for money; it is greed for one-upmanship, for power, for acceptance. But, how would a big name feel driving a BMW won in a game of bingo at a wedding? Or, what is one of them is spotted at the airport to catch a flight and someone from those 6000 guests is present and smiles knowingly at the ticket that was won and is being used?

That is the reason I call it downmarket. If you imagine for a moment that such gifts might be passed on to the less fortunate, who do you think those would be? What will the staff do with fancy cars? Besides, many will have to ‘respect the sentiments’ of the giver and keep the gifts. It is all hogwash because they would in all likelihood be backbiting about the host’s déclassé showing off.

For all the poshness, there are other areas where the hosts reveal chinks:

The menu was multidimensional: Indian, continental, Punjabi, Rajasthani, south Indian, Italian, Chinese et al. “In short, from dhokla-patra to noodles-pasta, there was everything to suit the taste buds of the distinguished gathering,” a family friend said.

Distinguished people do not attend wedding to eat. Distinguished people might be quite discerning and appreciate one sort of cuisine, instead of biting into dhoklas between bites of dimsums while a plate with quivering sphagetii waits for their attention, all to be washed down with robust Punjabi lassi or is it South Indian rasam?

This is not about one wedding. It has become standard fare, with different stalls set up s though you are at some buffet in a restaurant. With so many guests, it might be impossible to have a sit-down dinner. So, why don’t they just have bearers go around with finger food? Then it does not matter that patra is popped in straight after canapés.

Perhaps, the dinner spread from all regions and countries can be packed and given away as prize on some bingo night.

In another context, extremely progressive and gratifying report about wedding vows to protect girl child that I shall reproduce in full:

JAIPUR: After the saat phera and agni sakhshi, health department authorities in Jhunjhunu will make the newly weds take an "official" vow.

Stung by the increasing cases of female feticide, couples will have to sign an affidavit after completing the customary seven rounds proclaiming that they would not possess any bias towards the girl child. They will have to take an oath that the bride will never undergo sex determination test. This was decided four days after bodies of two new born girls were found at separate locations in Jhunjhunju. The sex ratio of males to females is the lowest in this district in the state.

Jhunjhunu's deputy chief medical and health officer Dr Pradeep Singh told TOI, for the first time in the state, such a scheme is being launched under "Save the Girl Child" project."To raise awareness against female feticide and infanticide, we have termed it the eighth vow of marriage. We have printed about 3,000 affidavits which will be handed over to newly weds during the marriage ceremony in the district," said Singh.

The affidavit reads: "We take the eighth pledge that the bride will not undergo sex determination test. We will do our best to save the girl child and also raise awareness among others." The affidavit will be authorised by the minister of state for health Dr Rajkumar Sharma and signed by the couple.