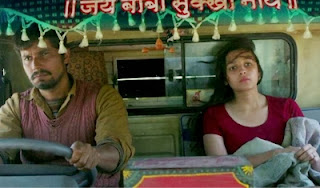 I had a profoundly cathartic experience while watching 'Highway'. It was when Veera and Mahabir are in the mountains, and they reach a house and she says, "Yeh tau mera ghar hai, mujhe hamesha se hi aisa ghar chahiye tha (This is my home, one I had been looking for)". It is a dusty, bare house, very different from her plush lifestyle in Delhi where "tameez" is taught and learned by buying silences.

Without getting into details and diverting attention from the film, let me just say that the home, a cavernous retreat, that she swept clean and put food in front of became mine. Next day, sudden gunshots hit Mahabir, and as his eyes meet the sky that seems flanked by trees, there is another purging. An acceptance of things being short-lived.

'Highway' has been called a road movie, but the journey pierces internally. Old maps are brought out, some lines erased, new ones formed.

Veera Tripathi, on the eve of her wedding, asks her fiancé, "Why can't we just run away and go to the mountains?" This is how she is. She wants to breathe free, take risks. For her the fancy wheels are just a means to getting away. She wants to go far, just go on and on...and when they take a U-turn, they are confronted by a group of criminals on the run who had no intention of such a 'meeting'. It is a chance encounter. Her kidnapping begins on an unreal note, and stays that way.

The gang leader, in fact, is angry with Mahabir Bhatti for taking her hostage. This is a criminal niche where they have not ventured. "Tu kutte ki maut marega (You will die like a dog)," he tells Mahabir. The latter's reply is stunning in its simplicity: "Jo kutte ki jindagi ji raha hai usko kutte ki maut hi milegi (one who leads a dog's life will obviously get a dog's death)."

While it is not emphasised, there is a strain of a political class struggle. At one point, not sure about what to do with her, he tells his mate that they should sell her to a brothel. He is not dismissive about it. He gives a reason. As a Gujjar, he vents his anger over how easily the rich abuse the women of the poor, even demanding their wives for pleasure. He wonders at the hypocrisy of gangsters too being concerned about the clout of the rich father of Veera. Yet, he does not abuse his power. He does not sell her. This needs to be seen in the context of her innocence being bought by one she was supposed to trust. Is that why she becomes comfortable in his presence?

Her story does not merge with Mahabir's, but runs parallel. They are not made for each other; they are like raw material that cannot be moulded. Therefore, she laughs in the midst of tears, she asks herself incredulously, "Why am I talking so much?" And she hides when the cops check the truck. She had a chance to find freedom from the criminals. Why did she not? Even Mahabir wants to know. 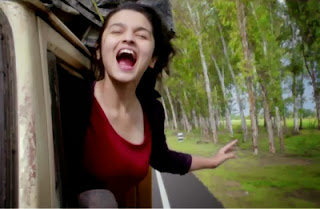 This is most certainly not about the Stockholm Syndrome. If that were the case, then Mahabir is the one suffering from it. He becomes vulnerable. But this is not about any such syndrome. It is not about being awe-struck or falling in love with your captor. Veera wanted to run away right at the beginning. Her escapism is a thirst to experience, to break free, and also due to insecurities. This is the captivity.

That time when she comes out with "when I was nine" and how her uncle sexually exploited her is not an episode. The retelling is not planned, which is why it is so effective. There are no gory details — the fear, helplessness, anger are all in her face and voice. And his stillness. She is the water, he the rock. The terrain has many of these water-rock scenes as they traverse through six states. Water rising, a spray, a jet, droplets in her palm, moving in circles around the rocks.

Mahabir has two moments of denouement. One when he hums the song his mother sang to him as a child and the other when he peeps into that dusty mountain house and sees Veera transforming it. "Promise me you will go and see your mother after all this is over" she tells him in the first incident. She holds him weeping close to her bosom, like mother to child. In the new home, she snuggles up to him, almost over his chest, like daughter to father.

They are together, but not joined. There is no adhesive. As he tells her on an earlier occasion after she rushes back when he leaves her near the police station, "What will you do with me - marry me, produce babies?" Later, waiting for a bus, she says, "I am not planning to marry or make babies. I just want to go a little further for some more time, knowing that you will take care."

We trust the elements as we climb hills, go into the sea, battle inclement weather. We trust almost everything we grow up with. Here the growth is on the way, a constant movement. In Veera's words, "I don't want to return where I came from. I don't want to reach anywhere. I just want that this road should never end."

Mahabir's death does not end her journey. She not only faces, but confronts the demons. She spits out words in their customised faces. And leaves for the mountains. To work. To live. To be. When she remembers Mahabir, it is of both of them as kids. They had never met then. What she is recalling is the innocence of their relationship, its purity. Like the clear air.

This is not about being a captive. When we feel good or seek out something, somebody. it is essentially the true love we feel about wanting to reclaim ourselves.

• Alia Bhatt as Veera behaves as nature does. Fire, earth, water by turns.
• Randeep Hooda as Mahabir smiles only once, weeps twice, yet he carries so many emotions in the hardened face.
• Imtiaz Ali has broken all genre rules. His direction is most unobtrusive.
• Anil Mehta's cinematography goes from craggy dark cranies, flithy lanes, godowns, to long stretches of undulating ghats, valleys, deserts, mountains. And he shows silence.
• A.R.Rahman. Quiet music is rare. Still music rarer.