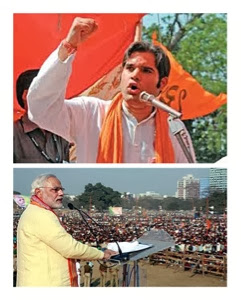 They were hopping mad, this group of 'independent' BJP supporters. Columnist Tavleen Singh asked angrily, "Is Varun Gandhi trying to return to his family party? What was this 'shahzada' doing on Modi's stage in Kolkata?"

The other darbari of the disciplined party, Madhu Kishwar, expressed her anguish too: "Varun Gandhi joins Modi Baiters. In private conversations he never made secret of pathological hatred for Modi. Now battle in open."

This is a hoot, especially the familiarity of private conversations.

What does it take to start a controversy? A report that sounds like a third-grade account of a picnic managed to make Varun Gandhi into both a traitor as well as a 'family' man.

Not a single phrase alluded to this shift in stance. In fact, IE was interested in the size of Modi's rally in Kolkata's Brigade Parade Grounds. As always, the BJP gave figures of a "huge" crowd running into lakhs. The party's general secretary Varun Gandhi seems to have said that the crowd wasn't the size that was reported and the rally was "okay".

The newspaper did not think this answer was good enough, so it persisted:

What is this? Why is the media suffering from performance anxiety?

Not unexpectedly, Varun Gandhi has called it a "mischievous article...implying that I was trying to denigrate Modiji and the historic Kolkata rally. Why would I denigrate a function that I myself organised? When asked whether the rally was okay, I replied it was absolutely okay."

Who is going to set crow now?

By then, conspiracy theories were raging. NDTV website had this title: "Varun Gandhi's reported assessment of Narendra Modi rally is gift for Congress."

Why can't the media just wait, or ask people who have either covered election rallies or have some knowledge of bells and whistles thinking? If anything, his being a Gandhi will help the BJP for he has already been portrayed as an outcaste from the fold before. He is the one who decided to take a risk and strike out, joining forces antithetical to the family's politics.

In 2009, when he was arrested for hate speech, he had said, "In our country, Varun Gandhi is jailed under the NSA and was having 'lauki' (bottle gourd) in Etah jail but Kasab is treated with 'tandoori chicken' inside the jail."

And his views on the 'paternal' family weren't charitable at all: "I won't comment against Congress as it was breathing its last, my mother had told me that I should not say anything bad against people who are on their deathbed."

Things do change in politics, but to base such an assertion on whether Varun Gandhi was satisfied with a particular size or not reveals immaturity.