The monk, misogyny and more 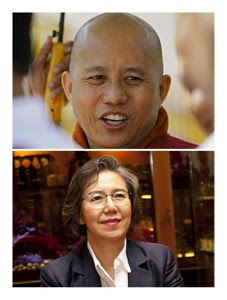 It is surprising that people are surprised only because a Buddhist monk got abusive. As with any other religious community, Buddhism would have its share of disgusting men of faith.

"We have explained about the race protection law, but the b**** criticised the laws without studying them properly."

"Just because you hold a position in the United Nations doesn't make you an honorable woman. In our country, you are just a whore...You can offer your arse to the kalars (derogatory term for South Asians) if you so wish but you are not selling off our Rakhine State."

More than his statements, one must note that the crowd cheered. That is something we tend to miss, and therefore target the tree when the woods are alive with similar sounds.

The condemnation by Thawbita, of the progressive Saffron Revolution Buddhist Monks Network, was rather revealing:

"The words used that day are very sad and disappointing. It is an act that could hurt Buddhism very badly."

How would such abuse tarnish the faith, and is that the only concern?

Honestly, though, in drawing attention to the abusive man as a person of religion there appears to be implicit belief that he has morally wavered rather than pointing out the patriarchal notions embedded in religion.

Name-calling invariably takes away from what is really abused. Wirathu has served time in prison; he is openly anti-Islam and anti-minority. Ms. Lee was speaking about the discrimination against them. After the monk's comments, she said:

"During my visit I was personally subjected to the kind of sexist intimidation that female human rights defenders experience when advocating on controversial issues."

However, all we get to read is that the monk called her a bitch and a whore. We don't seem to even want to address the issue of the abuse not being for who she is but for what she says. Indeed, women in such positions or with a political stand are sought to be reduced with such slurs.

The idea is to keep women away from public space, again mainly because women tend to have a more humane perception of the world. Gender here is also about how it impacts social positions and therefore ought not to be relegated to a victim of misogyny narrative.

Had the human rights envoy been a man, Wirathu would have had the same problem with the findings. But, he might not have called him names because he would assume they were equals, in that it would be gender reflection. Calling him a dick would resonate with his own, for example.

Some monks have said there would be no action against him. Even if there was it would soon be forgotten. In the end, Yangee Lee's report seems to have lost to the more potent insults she was subjected to. In that, everybody has become a conspirator.
By Farzana Versey at 7:38:00 pm