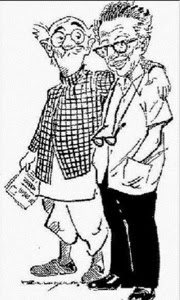 He was the only public intellectual in India who could make sense of the nonsense. The good thing is that he would baulk at being referred to as an intellectual. R.K. Laxman is dead.

Those who think a cartoonist cannot be an intellectual just need to trace his work. He could pare down the tonnes of bibliography and tomes to one box. He distilled them and came up with a trenchant take.

While some of it made us smile, he was certainly not a comic. His work was political and social commentary at its best. And he exposed it without moral pretensions. You instinctively knew that he was not scoring any points or patting himself on the back, something that latter-day cartoonists in India seem to revel in. 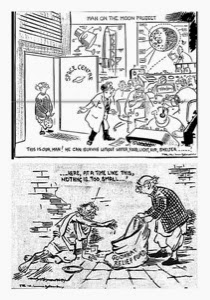 He did not appear to be friends with politicians, but he was no enemy either. That imbued him with a practicality and it reached the reader as an objective and concerned voice.

His caricatures were precise, taking one sharp feature to delineate the personality. You knew Indira Gandhi would follow the moment you saw the nose line. I thought he captured her hauteur perfectly. There are many more of other leaders and I would urge you to look for them.

However, his creation of the common man surpassed everything else, so much so that the dhoti-clad, checked raggedy jacket, half bald caricature has become to represent the aam aadmi. No political caps claiming the common man will ever be able to take the place of the Laxman one, because it came from a penetrating eye and a deep sense of anguish that did not disappear to get political mileage.

His common man is an observer occasionally forced to be a participant. But he does not lose himself. And when the need arises he even contributes with his commonness to become rather special. This gesture is not covered with tinsel as a celebration, but rather subtly it gives us a peek into what equality really means.

R.K.Laxman does not need a photograph to be recognised. His lines are intimations of, pardon the hyperbole, immortality.
By Farzana Versey at 8:24:00 pm