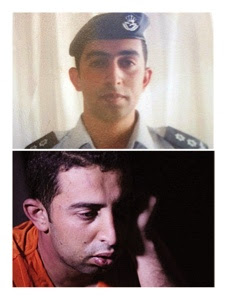 We seem to have become numb to the dehumanising methods of the ISIS. The response to the Jordanian pilot burned to death has been that is the worst. Is their cruelty to be judged on the basis on degree?

The fake Caliphate is well-organised and the killings are their calling card; they have nothing else to show by way of commitment. When we start comparing the different methods they adopt, it ends up as a stimulus for them to provide more and varied instances of what they can do.

They are adopting the modus of the Middle Ages simply because they claim to want to turn back the clock. Each time they are shown their regressive face, it is a victory for them. Lt. Moaz al-Kasasbeh was taken hostage while on a US-led coalition mission against the ISIS in Syria. They demanded the release of Sajida al-Rishawi, an Iraqi suicide bomber now facing trial in Jordan. There are political analysts who believe that if Jordan sends her to the gallows it would amount to revenge, which isn’t any good. She has been on death row for a while for the attacks that killed 60 people in Amman in 2005. So their logic makes little sense.

The matter of concern here is that she was not a bargaining point at all. Kasasbeh was killed a month ago; it is only the video that has surfaced now. The ISIS is therefore not only brutal, but also vicious. They do not stand for anything, other than a temporary belief in their infallibility.

The response to their actions is often disturbing. Invariably, the victim’s moral prism is exhibited, when that is never a point of dispute. However, it does convey all sorts of messages. How does it matter that he was a devout Muslim? Does it mean that one who is not devout, or not a Muslim, does have some kind of naturally probable victim license in our neatly-arranged conscience? We may RIP the victims, but it should really be RIP ISIS. They need to rot in purgatory.

I have read comments about how burning is anti-Islamic. Those who argue that ISIS is not Islamic lose a lot of ground with such careless statement that indirectly suggest that perhaps beheading is halal. There are also some comments about how burning alive is prevalent in India for honour killing and dowry. Why do we remember it only now? All crimes committed by terrorists exist in society, so trying to find an opportune equivalence is not only naive but designed to show selective liberalism.

Burning at the stake was a practice prevalent in France in the 14th century, primarily for heresy/blasphemy. The ISIS has no locus standi to even judge, but even if they were Kasasbeh cannot be accused of it. It is the arrogance of the ISIS and its belief in its own godliness that needs to be weeded out. Meanwhile Barack Obama has got an opportunity to state:

"I think it will redouble the vigilance and determination on the part of the global coalition to make sure they are degraded and ultimately defeated.”

Degraded it a typically moral term. It is this that leads the Japanese to refer to the hostages from their country as “another 9/11”.  Has not Japan been through horrific terror in its history? Why does all contemporary terrorism need to be legitimised by the United States of America? 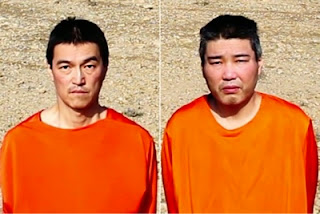 After the beheading of Kenji Goto, an old tweet of his from 2010 went viral:

“Closing my eyes and holding still. It’s the end if I get mad or scream. It’s close to a prayer. Hate is not for humans. Judgment lies with God. That’s what I learned from my Arabic brothers and sisters.”

The ISIS is not choosing victims who need to be taught a lesson, so emphasising their humaneness is a non-sequiter.  And how does one know about the humaneness of the hostages who do not have much of a visible presence, like say Haruna Yukawa the other Japanese who was beheaded before Kenji?

The public space will once again thrown up a few fake moderate Muslims battling biting cold in fireplace rooms who will post #notinmyname tweets to fight the imminent threat ISIS poses to their cocooned world.
By Farzana Versey at 12:04:00 pm