India's Republic Day has given an opportunity to leaders of two of the biggest democracies to showcase themselves.

The media, and the public that views TV, reads newspapers and is connected to social media, are all agog by the display of camaraderie. Does this in any manner indicate change in Indo-US ties? How good is it really for India?

That does not seem to be of any immediate interest. We are all lapping up trivia. It began the moment an invitation was sent and accepted. To the run-up we were told how roads would be cordoned off, how the four-layered security would work (including 12 dog officers arriving ahead of the visit to sniff out danger).

Obama's office sent out the message that there should be no terror attacks during his trip or there "would be consequences". There was no statesman-like no terror at any time before or after. This sort of arrogant and insensitive statement set the tone for what is clearly modern-day slavery where bonhomie buys acquiescence. 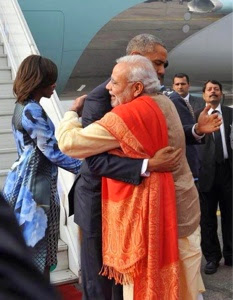 Narendra Modi broke protocol and went to receive Barack Obama. Images of him with the President and the First Lady after they alighted have sent the BJP supporters in a frenzy. Had this been the President of Nepal or Fiji Island would they feel as elevated?

Personally, I do not like over-familiarity between political leaders in the public space. It is less about warmth and more a public relations exercise. Both are conveying a message to their international constituencies.

Their lunch menu became news. Planting a sapling became a huge moment. And tea became "chai pe charcha", which Modi had used during his election campaign. He is apparently still campaigning. 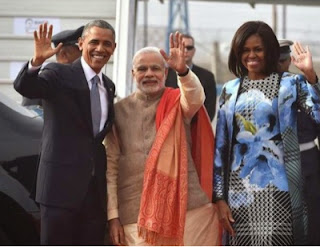 At the joint press conference, Modi referred to the US president as "Barack". He spoke about chemistry between them. One is surprised he did not quote from Linda Goodman's sun signs to establish just how compatible they are.

The BJP had opposed the Indo-US nuclear deal during Manmohan Singh's tenure. Today, Modi and Obama have taken this even further. Modi informed us that the US would be an ally in defence. He parroted the terror line. If the US is so confident about its defense, it would not bulldoze other countries.

The so-called largest democracies are really about both wanting to play Big Brother. Sometimes it is good. Mostly it is not and proves to be a nuisance to others.

As I write this, the droning sounds continue on TV. The breathless, "Oh my god!" tone of the anchors seems to convey they've never seen an American President with an Indian Prime Minister feeling so jolly good before. For them, I have a few images from Barack Obama's previous visit. 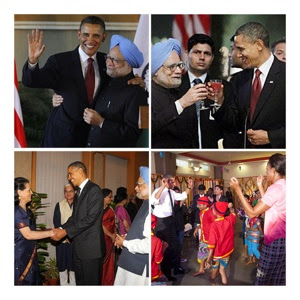 And Obama cancelled his proposed visit to the Taj Mahal to visit Saudi Arabia to condolence the death of the king. Joe Biden was already attending to that. Here, the Hindutva bhakts we already speaking about how the Taj was a temple once. Should they not, then, see it as a rejection to their claims, if not of this ancient heritage in preference for a dead Arab King?