Whose yoga is it, anyway? 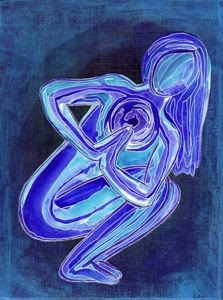 After this Yoga Day is over, nobody will give a damn about it, neither those promoting it nor those opposing it.

As we celebrate the occasion on June 21, it becomes evident that unlike the rest of the world, for Indians it is not only about physical wellbeing. It takes a very simplistic mind to suggest that the sudden interest in yoga is about health. If that were the priority, then our health infrastructure would be revamped and several other cures propagated.

Perhaps those who perform their asanas and deep breathing might have gone about it as they always do but for the added burden of being made the keepers of a cultural heritage. This becomes more potent when you have to deal with what appear to be enemies of yoga. Supporting yoga today is also about patriotism.

"Yoga is the best soft power of India," said external affairs minister Sushma Swaraj. Inherent in the statement is the belief that we can colonise others with it, and indeed with so many other countries adopting it it is possible to indulge in such delusion, especially where the West is concerned.

The same goes for the prime minister. When Narendra Modi suggested to the UN to institute a day celebrating yoga, he was claiming heritage, capitalising on the foreign interest, and appealing to the NRI community by taking care not to use Hindutva evangelism and spoil their case in their adopted lands.

More than culture, it is an assertion of patent rights. Our foreign obsession often takes us to our own cultural moorings only after they've been accepted overseas, largely by the whites. Do we hear about blacks and yoga? There is no way that the foreigners enamoured of yoga are doing so solely due to its physical benefits. They like the exotica that accompanies it — the incense, the spiritual poses, the history and the mythography of finding the self from the navel to the seat of all desire at the base of the lower back, as the kundalini rises.

Added to this is the guilt that they are taking over yoga. There has been much debate for years about the appropriation. This is not quite true for Indian gurus from Maharishi Mahesh yogi to Deepak Chopra made money overseas and gained currency in the land of their origin because of their famous clientele overseas. There might be a few mom & pop type yoga stores, but it is more likely that it is preferred to be first experienced in its 'natural' environment.

The truth is that yoga has been chosen for special attention simply because it is a thriving industry, and not because India wants to culturally invade the world or the minorities. However, the 'yoga is anti-Islam, anti-Christianity' lobbies come in handy because the majority of middle-class Indians, avaricious as they are, like a moral core to justify their greed.

With the subtle implication that this is an ancient art form that needs to be protected and propagated, they feel assuaged. They carry history in their aspiring to be nimble forms. 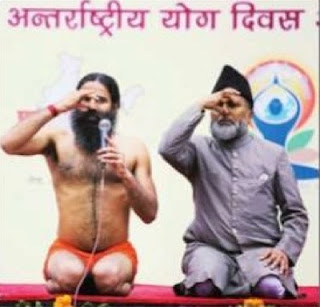 It was bad enough that certain Muslim groups and individuals started talking about how yoga is anti-Islam, but it is even worse to see the ridiculous attempts to co-opt other Muslims. Photographs of maulvis and people wearing burqas and skull caps holding their noses and contorting their bodies just make it appear like the farce it is turning out to be.

It started with this nonsense about how Muslims can't do the surya namaskar because in Islam you are not supposed to worship any form. Not everybody who does yoga worships the sun or the moon or anything. Why even bring this up? This gave Yogi Adityanath just the kind of opportunity he waits for:

"Sun is the source of life giving energy. Whoever thinks Sun is communal, I would like to humbly request them to drown themselves in the sea or they should stay in a dark cell."

These Muslims deserve his idiocy that misinterprets their intent and even communalises the sun. At the other end is Sakshi Maharaj who called himself a true Muslim and Prophet Mohammed a great yogi. Some others said namaaz is like yoga.

Some Muslims asserted that they are not supposed to say 'Om' while doing deep meditation, and somebody suggested they could replace it with 'Ameen'. You really do not need either, and if yoga is all about health then just get on with it. By creating a controversy, bigoted Muslims have just played into the hands of the other bigots, and made themselves into a laughing stock to be 'saved' by the likes of Baba Ramdev.

Christians too have objected because yoga is "not compatible with Christianity". An event organized by drug rehab NGO Kripa is in trouble because many from the community believe that Fr. Joe Pereira is more like a Hindu yoga guru. A parishioner said, "...yoga is not Biblical. If a priest wants to organise something, he should do it within the framework of the Christian world."

Everyone seems to want to score points.

Mr Modi, despite all the criticism the event has generated, has used what has always been there to garner more attention for himself. He wants to ensure that this occasion gets into the Guinness Book. Large contingents will be out, including police personnel and bureaucrats.

A yoga instructor at the class for public servants was quoted as saying:

“They heard it on TV, and they are running toward the yoga. The prime minister is the king. If the king does something, that is very effective. And this time, our king is doing yoga.”

School students who anyway are expected to participated in Physical Training (PT) classes are being brainwashed. Is this about general wellbeing? One politician, whatever be his motives, seems to have got it mostly right. Karnataka Social Welfare Minister Anjanaiah said:

"Yoga is for lazy people, especially people belonging to well to do families. They do not have time for exercise in the open including taking a walk...People should ask their children to indulge themselves in playing outdoor sports including running and long walks instead of yoga."

Have you seen a poor person practise, much less discuss, yoga? Yoga is essentially for the angst-ridden elite looking for reprieve or the neo-enlightened who think it is a non-invasive body cleanser. Very few use it as an alternative to medicine. And now with the supposed renaissance, it has become a symbol of political opportunism camouflaging as culture. Forget yoga, we need a new culture.

The Taliban has now objected to Pakistanis celebrating the occasion, so many events have been cancelled. An earlier piece I wrote on Pakistan on an Indian spiritual trip
By Farzana Versey at 11:36:00 pm