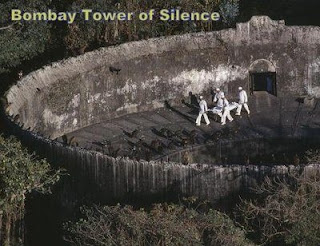 A news story on untouchability among the Parsis may seem like an anachronism, but this is how the pallbearers in the community are treated.

They are now protesting, not against the untouchability but their pay scales. These khandias have to work at odd hours, live amongst corpses till they decompose completely, and it takes a long time for there are no birds of prey these days at the Doongerwadi Tower of Silence at Malabar Hill. The solar panels leave the bodies "soggy". As one khandia was quoted as saying, “When we go to drag the body, a hand or a leg comes off."

These men are treated with contempt, as the report conveys so well. They can't live in the Parsi baugs, there is separate drinking water, they need to purify themselves before entering a fire temple, and when they are given money they have to open a pouch so that the donors do not get contaminated.

The contamination bit bothers me, and it is not restricted to Parsis and is rampant in all communities. The pallbearers are carrying and cleaning people who were once loved and lived amongst us. How does this defile them? Is it only considerations of infections that might pass? I think not. If that were the case, then long after they have washed and aired themselves, they would not still be ostracised for being who they are.

What is the point of funeral rites and memorials if we cannot respect those who ensure that the deceased have a dignified last image?

There are always exceptions to the rule, but that only emphasises how entrenched these non-scripture, non-legal rules are and also how social norms and prejudices have a greater say than them. It is appalling that we continue to be trapped in fears of contamination.

Some years ago, there was a demand for some purification ritual because actor Arjun Rampal (who is married to a Parsi) had said he had sneaked into a fire temple — as a kid. I had written Parsi Controversies then.

We do pull up Hindus for their practice of untouchability, and rightly so. But Muslims, Christians, and Parsis are offenders too. Muslims have a higher caste of Syeds, and many sects look down on others — including not having water in the house of one or treating another's rituals with contempt. Even if a religion talks about the differences, should we not move with the times? Ages ago, there were probably reasons of survival of the fittest and assertion of territory to be factored in. Today, social mobility makes these redundant.

The hypocrisy makes things worse when there is talk of dignity of labour in public and scant consideration privately for those performing such tasks. Why is it that a person with a degree doing a menial job is seen as honourable but one 'born' into it not so? These prejudices are not ingrained but learned. And such learning is also about some form of intellectual superiority, and therefore slavery.

If we must shun, then shunning these double-faced consciences should be considered good untouchability.
By Farzana Versey at 2:02:00 pm