Mona Lisa in the Lion's Den 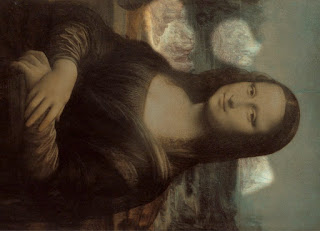 I always suspected that Mona Lisa was a bit of a wild cat. Something to do with the Cheshire cat smile. Oh, I know, it has been analysed to death – from toothache to the pleasure of labour pains to muscle dystrophy to sucking on a lozenge. Okay, that’s not been explored yet. Anyhow, New York artist Ron Piccirillo is a guy I’d like to go on a safari with. It is so difficult to spot tigers in the wild, and I am quite certain that he will. He can see them. Just like that.

Piccirillo has transformed a yawn moment into something exciting. Leonardo da Vinci’s subject is surrounded by animals, he believes. Most people look at paintings as they are meant to be, but our artist here turned it horizontally and found a leopard, an ape, a buffalo and even a crocodile or snake right near the subject’s right shoulder. I suppose da Vinci maintained an element of delicacy and refrained from painting Mona Lisa horizontally.

I have tried to notice all those animals and it is the lady who seems the most beastly, because she is primal. Those other figures look like mushroom clouds to me.

But let it not be said that Piccirillo has not attempted an indepth analysis. What started as a “Geez, that kinda looks familiar” moment has turned out to possess some history.


According to a report:

One of the passages that references “her heart gnawed by a swelling serpent” also says, “Give her a leopard’s skin, because this creature kills the lion out of envy and by deceit.” Though the passage does not mention the “Mona Lisa” specifically, Piccirillo said he believes the references to the serpent and the lion lead back to the painting and back to the woman with the infamous smile.Piccirillo said he believes that Mona Lisa was not an actual person, but, rather, symbolic of the human trait of envy. He also believes that his discovery will be important to an art community that has been puzzled by the painting for centuries.

Symbolism is a matter of perception. Even so, this sounds plausible. However, why is she so calm? Where is the envy in her demeanour? She has probably internalised the snake, but could the serpent not be the Biblical tempter? And if is it coming out of her body, then is she not released? Is that a smile of relief?

Why did the lion not eat the buffalo? Does the ape represent human evolution, which has not quite evolved? Why did the da Vinci blur the figures?

Let us make this simple. If there are animals, could it not just be a bucolic scene? One of the earlier theories was that the model who posed for the painting was a peasant woman, so this fits in. I understand that peasants might not really be surrounded by lions and apes, but farmlands are known to be intruded upon by wild animals. Or perhaps she had strayed into the woods. The fact that she is painted only upto her waist means that she was not joyous about her outing; there is no suggested movement in her stance. Or, she was unafraid. Perhaps she had been bitten but was too shy to admit it and cringed just a little, enough for it to be considered a smile.

Or, as I began to say, she was a wild cat. On her hunting spree, in all likelihood she had trapped those animals, the trophy snake on her arm. We see no weapons, but she has probably speared them already and they lie there in a pose that in film parlance would be called ‘freeze frame’.

Mona Lisa to my mind is the precursor of the Sharon Stone ‘Basic Instinct’ character without an ice pick. And instead of crossing her legs, she has her hands crossed. Now that could mean she is hiding something. Another beast?