The colour of fire: Agni-V

I hate missiles. They are inhuman. But, of course, you might say, that is the idea. I hate missiles because I like a fair fight, if at all. Firing missiles with a push of a button is not fair. Don’t give me examples of other countries and how all is fair in love and war. It is not.

Yet, we in India have been jubilant over the Agni-V ballistic missile that took off from Wheeler Island off the Odisha coast on Thursday.

I tried to get excited as I saw a few clippings on television and then some photographs. 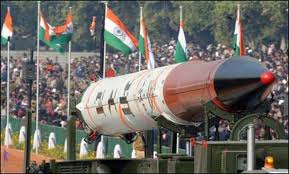 In repose it looks like a giant-sized pencil. It reminded me of a fairytale where a young character stares wide-eyed at this marvel and tries to grasp it in her hand and she just cannot. And then with a great rumbling sound it moves on its own and whooshes off into the sky, writing out something on the clouds in red letters. The girl cannot read it clearly and the pencil is gone. She cries. For some reason I think of the character as a girl. Maybe, I am rewinding to my own childhood.

Missiles are an adult childhood game. I want to applaud this longest range ballistic missile with a range of over 5,000 kms. I want to start clapping when I read newspaper reports that call it “a high five moment”, “a game changer”. I want to make angry faces at the US for lecturing us to “exercise restraint” and to Chine for calling it a “political missile”. We are just playing. So what if it can reach most parts of China. I can reach China too.

I still see that little girl and a colour pencil. But now I look closely and it has ‘Bharat’ written on it, and then it pierces the clouds and withstands heat of 3000 degrees Celsius. I had no idea heat could ever get that hot. I do not know many things. I am sweating in 35 degrees C. This must be one swell of a missile. It has the right name. Agni – fire.

We are now part of the elite club of nations with Inter-Continental Ballistic Missile (ICBM) technology like U.S., Russia, France and China. I read that, “India's policy of no-first-use of nuclear weapons, Agni-V will provide the country with depth in deterrence.”

This makes me feel good. The missile can reach very far, can destroy, but unless somebody else uses it first we will not do anything. I don’t know much, but I only hope it does not start to rust, or its parts do not get consumed with all the wiring inside. If it can withstand so much heat, then it must be careful not to burn itself. It happens with so many things in life.

I know you will tell me to shut up and stop this fairytale. You will quote some scientist who said, “Today, we have made history. We are a major missile power.”

Okay. I want to be part of history, of an elite club. I also want every little girl and boy to get a colour pencil just like Agni-V to act as deterrence against hunger, and to bring some cheer in their lives.
By Farzana Versey at 11:53:00 pm