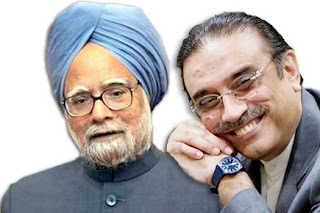 The Ajmer Sharif Dargah in north India has become for politics what the Wagah border is for peace activists.  It is just so much melting wax and withering flowers.
Pakistani President Asif Ali Zardari is to pay a visit to the shrine on what has been touted as a “personal” trip. Given his position, it is quite natural that Indian Prime Minister Manmohan Singh would ask him to join him for lunch. Now, when these two countries meet for any meal, there is a slow fire burning and a pot boiling in the background. You can see what is cooking, but the people at the table do not seem to have a clue.
We are still at the stage where the sophomoric question is: who should make the first move? Many moves have been made, in wars, by insurgents, through signed pieces of paper, with hugs, blasts, dialogues. These seem to have fallen on the head without anyone making the first move. Instead, the friendly country far from the neighbourhood has decided to do something about it. 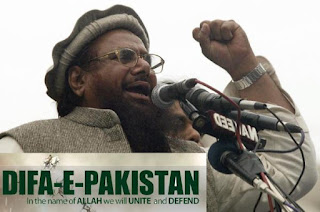 The United States of America has put Hafiz Saeed, the leader of Jama'at-ud-Da'wah that was declared a terrorist organisation by the United Nations in December 2008, up there as the big dish. A little problem here. You don’t get him. He is just an item on the menu. You have to hand him over to the great master chef, Barack Obama, and in return take away the $10 million bounty offered by the U.S. for any information on him. No one quite knows what Mr. Zardari plans to pray for at the dargah, but it certainly isn’t a huge amount of money this time. As for Dr. Singh, he is a clean man with clean thoughts and, anyway, he does not have Hafiz Saeed. He can demand that he be handed over, is the chorus. Pages and pages have been exchanged over the Mumbai attacks of November 2008.
We need to look at this a bit carefully. India and Pakistan do not perceive Saeed in the same manner, and the simple reason is that they cannot. They are two countries with different compulsions. Saeed has been the mastermind behind those blasts. Ajmal Kasab, the hit man and the last guy standing, became the fall guy. In terms of a criminal act with the evidence he would be culpable. How does one gauge the extent of input by a mastermind? Osama bin Laden did not go out and attack anyone, yet he was the hunted. If we go by this logic, then the U.S. President must take responsibility for the killings of all the civilians in unprovoked wars.
The reason for bringing this up is the crucial element of American convenience. It would be facile to believe for a moment that the US is concerned about India, even though Obama said it has not forgotten the Mumbai attacks. It remembers at an opportune time. The present Zardari-Singh meeting is not terribly important, except to discuss the same old things. I also do not believe that the US bounty will suddenly make terrorism an issue. It has always been an issue.
The American establishment is only making sure it gets a sneak preview. While peace between the two countries is whimsical, the state of unrest has helped outsiders a great deal. This bane has been a boon for them, for a huge world population can be managed, if not colonised, by the simple expedient of posing as a saviour figure.  It simply does not understand that terrorism in these parts is feeding off angst. It is playing on sentiment.
To put it simplistically, for the West the Mumbai attacks showed India as a rich country and Pakistan as a few men in dinghy. Good old David Headley, Hafiz Saeed’s video maker and map drawer, managed to get a visa to India and do his recce trips as a US citizen. They have him there. Do the two countries have the courage to ask America what exactly it is doing with him?
Hafiz Saeed is roaming free. His December 2011 rally against NATO killings turned out to be bigger than that of most politicians. This was not in some small town, but in Lahore, where he turned the ‘war on terror’ on it head by urging the Pakistani authorities to revoke its cooperation. Whether anybody likes it or not, there are many Pakistanis who support his organisation, Difa-e-Pakistan. Political pragmatism would make it imperative to be on his side, because at least with regard to NATO he is expressing the prevalent sentiment: “In 10 years of war that US has fought in Afghanistan, Pakistan actually lost more than the invaded country.” 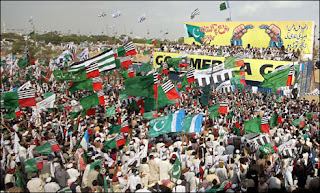 Afghanistan has been a sore point with mainstream Pakistani politicians from the time of the influx of refugees during the Afghan war to the Taliban entering the plains and attacking just about every group of people. The splitting of hairs over ‘good Taliban’ and ‘bad Taliban’ has in fact blurred the lines. In the popular imagination, the U.S. is to blame for it. The audacious move to assign ‘guardian angels’, troops to watch over their sleeping comrades “against possible attacks by rogue Afghans” after an American soldier Sergeant Robert Bales killed sleeping Afghans, amounts to playing victim.

Pakistan is caught between these two victim-aggressors. It is willing to risk drone attacks, but the authorities probably believe that the rightwing within might come in handy. The view that Pakistan wishes to create communal tensions in India works symbolically to the benefit of Pakistan and India should disabuse such notions actively. If Pakistan wishes to destabilise India by hitting out at its totems of economic progress, then why would it want to do trade with India and why should the Indian government encourage it?
If India believes that the Inter Services Intelligence (ISI) is behind it all, then does it make any sense to ask Pakistan to hand over Hafiz Saeed or to even try him? More importantly, if India believes that all acts of terror emanate from Pakistan, then is there any purpose in pursuing peace? Peace does not merely mean no war. It conveys a sense of confidence and trust. Neither country trusts the other.
This leaves a large opening for America, and it never fails to appear. The farce of a $10 million bounty will be played out in salons rather than in Islamabad or New Delhi. This is a huge bait for Pakistani liberals and expats to fill the U.S. coffers during the run-up to the elections. The money will be in trust, without it being spoken of in such clear terms, and the well-wisher Pakistani lobbyists will buy peace. America knows this only too well.
The obvious question would be: Aren’t there more prominent Indians in that country? Rich Indian immigrants are keener on being American; they do not have to prove their innocence, unlike Pakistanis. This is a major difference.
What has this got to do with President Zardari meeting Dr. Singh? If one is to understand some of the ‘peace’ proponents, then India is doing a subtle America without the bluster. The lead opinion piece in The Times of India had this gem:
“Clearly, Zardari has stolen an imaginative moment from the bitter-sullen history of India-Pakistan, by asking to come to pay his respects to a cherished and much-beloved saint across the Indian subcontinent. It shows what we, despite the horrendous Mumbai attacks of 2008, are still capable of. Perhaps the Pakistani president will seek forgiveness for those attacks and pray that both countries can move on by jointly erasing the scourge of terrorism. God knows, there are more people killed in Allah’s name in Pakistan today than elsewhere in the region.”
This is so full of Pat Robertson type evangelism, with its penance and forgiveness tone, that one wishes that all SAARC meetings are held at the shrine. In fact, such ‘private’ visits only reinforce the belief that we in South Asia will always mix religion with politics.


Taking such peace talks further is a piece in The Hindu jointly written by former Foreign Secretary of Pakistan Humayun Khan and former Foreign Secretary of India Salman Haidar:
“Peace within the region is an essential requirement for India to continue on its upward path. It must make renewed efforts to convince its neighbours that it poses no threat to them. It still has to fully convince them that it is ready to honour their independence and separate personality.”
How can such a thing be proved? India is fighting movements within almost as much as Pakistan is, with probably fewer casualties. The emphasis on economic progress, in fact, diverts attention away from political instability. There is no doubt that India being the larger nation has to respect other nations, but their sovereignty depends on how they manage contradictions within. Bilateral peace has little to do with this.
“To further allay apprehensions, discussions could be initiated on relocation of forces along the border and on regular meetings between chiefs of the armed forces and of intelligence agencies. The need for better understanding between the two militaries cannot be over-emphasised, because the security syndrome in Pakistan is the major obstacle in the way of progress.”
Do the armed forces act independently? They don’t. Besides, there is a difference between armed conflict and terrorism. Terrorism does not take the regular route. While Pakistan has to deal with the army as possible government, India has to handle the politicisation within the army. How they talk to each other matters little when compared with how they operate inside their own countries.
Dr. Manmohan Singh does not have to worry about the Indian armed forces posing a threat to his position. Asif Ali Zardari has to every minute of the day. A little prayer at the dargah will not change that. What he might get by way of benediction is a new eureka motivation: blame the existence of Hafiz Saeed on newbie willing to sup with Islamists Imran Khan for the moment. Wasn’t seize the day an all-American novel?