Diary from Raisina Hill: The voice of a 17-year-old 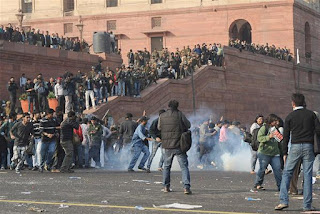 I live in Delhi and have already been to President’s house and Mughal Gardens. But yesterday, I heard my friends from college were going to protest. I know that girl got raped badly and is fighting for her life. How is the paper calling her ‘Nirbhaya’, fearless one? Don’t they understand she must have been so frightened at the time? It frightened me. I travel by bus. Papa wants me to become independent and not use the family car. My brother and sister are five and seven years older. I know the criminals should get punished forever. Why are police never around? And why are they calling it ‘Shame’. One lady even wrote that raping with penis is different from raping with iron rod. I find this shameless. Why are they calculating? I get angry with this.

Last night I sat to watch news on TV and chatted with Bhaiyya and Didi. I saw big crowds, people saying this is Tahrir Square and Tiananmen Square. Earlier they used to say we were like Singapore and Shanghai. I am getting confused. Then those cops brought out water cannons, put big yellow fences and even ran with lathis. The TV people said the students also threw stones and damaged property.

How do we know whether they were students? And from Delhi? I began to feel stupid that I was not there. They were saying this is voice of India. My voice was not there. Didi, Bhaiyya, Mummy, Papa, even our driver Sohanlal and maid Sumitra were not there. They are also India. How all these big actors become voices of India? Anchors were shouting that no one cares, that the President didn’t come out to meet these people. But who are these people? Why did Swami Ramdev want to come here? If he is concerned about rape, why does he not speak out against all those dirty acts in ashrams and madrassas and churches? Why does everybody want to take to the streets? Annaji, Arvindji, all fighting for the common man, but surrounded by famous people.

I read somewhere that those who don’t support the protest live in ivory towers. We live in Kalkaji. Both of my parents work. We went to good schools and colleges, but are taught the value of work. Didi did part-time voluntary work in an orphanage; she is now an intern at a government hospital. Bhaiyya is studying to be a lawyer, but he helps out at a friend’s CA firm. I wanted to be a journalist. Now I am not sure. The papers are full of stories I already saw on TV or read on social sites. If I join a TV channel, what will I do? Run from one place to another and get people to scream and shout and I will also scream and shout and feel important? Didi was giggling when she was looking at something on the computer. It was about Kanchan uncle and Barkha aunty, and who was on whose side at Raisina Hill. Everyone liked to say Raisina Hill. There is no hill there. Anyway, why should TV and media people be on anyone’s side and why should we, the people, have to be fed this ‘news’? If this is India’s voice then why are different news waalas talking different things about what should be one voice?

They are saying this is reporting from the ground, this is reality, we must get real. We who are not doing anything are elite types. How do they know the youngsters protesting are not from elite families? I know some who went there. They are very rich and many don’t even read papers. I saw their Facebook walls with photos from the site. I don’t want to lose their friendship and I wanted to click ‘like’, but what is there to like about someone running, some climbing electric poles? One dude even removed his shirt. He looked kewl and I like him. Am sure many girls will. He will become popular. Will that girl in the hospital bed know all this tamasha is for her? How will she feel? 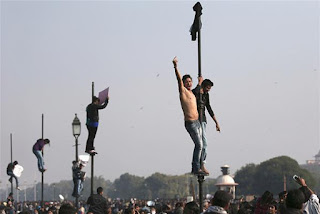 Our parents taught us to be careful. Now some aunty on YouTube was shouting (why are they always shouting? Is this what they mean by being voice of India?) that women can go out anytime, anywhere, wear what they want, it is their right. I want to ask mummy why I can’t wear short skirts and have a curfew time. But then Bhaiyya has to also follow some rules. If he took out his shirt, he has had it. Once he kept a few buttons open and was going out. Mummy gave him such a firing. He will get angry if I say this, but he wanted to look sexy. Papa told him nicely later that it looks vulgar and no girl gets attracted to this. So, we have restrictions.

Now they say it means we don’t have independence. As far as I know, all of us made decisions about what subjects to choose, what professions we want. We wear clothes of our choice – skirts (but not so short that we have to think twice before bending), jeans, salwaars. We have friends and our parents never stopped us from going to their houses or inviting them. Didi has a boyfriend and he is from another caste, another city. So, now someone will again say we are elite. Raveena Tandon is not? Farhan Akhtar is not?

It is true men behave badly in public places. They have no right to. Some girls carry sharp clips in their hair from Mummy’s young days. So in 20-30 years it has been like this, not only in Delhi. I read this article where the words “rape culture” was used. What is culture about it? I asked Didi. She said it is not proper use of word. What is culture, I asked. I know, but I wanted her opinion. She said culture is art and also how each society is different and unique in dress, food, behaviour. So, how can anyone talk about rape culture as though it is part of life?

Why are they protesting when they say people want rights? They are asking for strict laws. Why don’t they file cases? I see so many times youngsters don’t even help out elderly people to cross the road. If they have so much time and energy to protest, they should form groups and do police work. The government has now apologised. But can politicians be on buses to see who is a criminal? The law has to be strict. For everyone. In Mumbai’s Marine Drive some years ago a cop raped a girl inside the chowkie and the residents were more worried about their reputation. 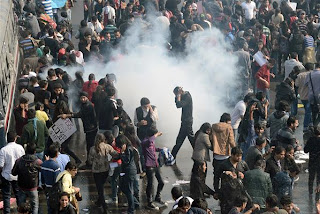 People are saying how dare peaceful protestors are called mobs. All mobs become unruly. They are called ‘lumpen elements’. Go to Kashmir. Go to the North East. Go to small towns.

Who is the leader of these protestors? In a year’s time I will be able to vote. I will be able to choose a candidate, a political party. I cannot do that with these protestors. They want justice. I also want justice, not for one case, but for all cases. Even today, I am seeing protestors versus police. Then, how can we ask same police to change? People are saying it was spontaneous. How can you have posters and flags and all that just like that?

One uncle was proudly saying he has not missed any protest and is sorry he cannot be in Delhi. Just imagine, he thinks he is a proud Indian because of this and all who don’t agree are not Indian. Then people at Azad Maidan, at Ramleela Grounds are most Indian. Why are the other politicians not at the protest, the big people like Shri Adbaniji or Shri Modiji or Mayawatiji or Mulayam Singhji or Mamata Bannerjeeji? Political parties are talking against each other. So, who is the real voice of India?

Please don’t judge those who don’t come out in the streets. Don’t ask ladies to take cabs with woman drivers only because of rape cases. One day you say women should choose what they want. So, let them decide what driver they want. Don’t create fear.

I am very sad I could not be with some of my friends, but I am also happy that I will one day really fight for justice. My Bhaiyya will. My sister will. My maid Sumitra fights everyday to make her children grow up and not be poor. Her daughter goes to school. No one from her basti went to the protest rally. They did not even know about it. They don’t have smartphones and Facebook accounts. One day they will. And they will ask to be treated equally in offices, not only men and women but irrespective of gender. They will put photos of achievements, not screaming and shouting. And I will ‘like’ that.

Sohanlal and Sumitra are also voices of India. Can you hear them?