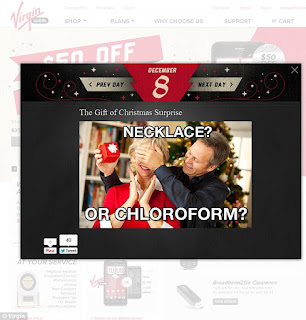 The US ad for Virgin Mobile appears to have made light of a crime: rape. The obvious question would be - are there no limits to sexism? But, then, we reduce the argument.


As you can see, it features a man standing behind a woman, trying to shut her view. He holds a red box. The caption reads: 'The gift of Christmas surprise. Necklace? Or chloroform?'

I go with the rape theory. However, for the sake of argument, are rapes always planned? By asking her, are we as viewers of the ad complicit in suggesting that a man will ask before he commits the crime, that the woman is to blame for wanting a gift so badly that she might - a very covert suggestion - just say chloroform to humour him? The ad is bad enough; seeing it as a joke on rape seems worse.

Like most people my first reaction was the same. Then, I looked at the picture a few times. The gesture of her hands does convey exclamation; it could also mean she is protecting her neck from the necklace. Why is she smiling then? Blind trust?

“Having just seen, for the first time, the Virgin Mobile US advert which has upset many today, I agree it is ill-judged. Although I don’t own the company [it is owned by a US  firm, Sprint Nextel], it carries our brand.”


Will anyone unsubscribe to Virgin Mobile or its US partner Sprint?

Now we come to the business of advertising. Why would a festive occasion like Christmas be transformed into something Gothic? Does it subliminally appeal to consumers, who probably become less sensitive to social propriety in their fervour to buy, and that as a result everything becomes an object?

That is something we should ask ourselves.
By Farzana Versey at 9:47:00 pm