Is she dead? Injured? Her limbs blown off? I will never know. I knew her only as a pseudonym. She often spoke about training for the marathon. She was, from all accounts, rather fit “for my age”. I did not know how old or young she was. I only discovered the tremendous effort she put in for something that gave her so much joy, such a sense of achievement.

Stray exchanges revealed that she was a nurse of Pakistani origin. However, I felt her constant assertion of her American nationality a bit overarching. There was a touch of insecurity, and I know how it feels.

Take any attack and the first word on everyone’s lips – and that probably constitutes most non-Americans too – is jihadi. Miles away, my first thought was not one of sympathy, but “Hope it is not a Muslim” on hearing about the Boston Marathon bomb blasts. Paranoia is dehumanising us, instead of making us more sensitive. I was shocked that President Barack Obama was berated for not calling it a “terrorist attack”.  The same people who demand the use of the catchphrase refer to the many more trigger-happy young kids and racists as gunmen and almost always there is an attempt to understand their behaviour in terms of “mental instability”.

It is not a very healthy attitude when only due to one’s origins we wait for the insiders to voice our thoughts and heave a sigh of relief. I usually do not hold back, but even when I openly give another perspective, I am always aware that I will be judged not dispassionately for what I say, but for ‘who’ I am.

And so when I read Glenn Greenwald write in The Guardian that a day after the April 15 Boston attack, “42 people were killed and more than 250 injured by a series of car bombs, the enduring result of the US invasion and destruction of that country”, I thought more people would understand. Greenwald by virtue of not being a Muslim is quite above any suspicion or agenda. There will most certainly be people who might castigate him, but he will not be seen as someone who is paid by terrorists.

Here are some salient points from his piece and my reaction to them:

“The widespread compassion for yesterday's victims and the intense anger over the attacks was obviously authentic and thus good to witness. But it was really hard not to find oneself wishing that just a fraction of that compassion and anger be devoted to attacks that the US perpetrates rather than suffers. These are exactly the kinds of horrific, civilian-slaughtering attacks that the US has been bringing to countries in the Muslim world over and over and over again for the last decade, with very little attention paid. Somehow the deep compassion and anger felt in the US when it is attacked never translates to understanding the effects of our own aggression against others.”

I am not too sure if empathy is the solution, as the tweet he reproduces reveals. How can it when the immediate reaction is to hark back to 9/11, without even trying to comprehend the difference in the reasons and manner in which the attacks were carried out? 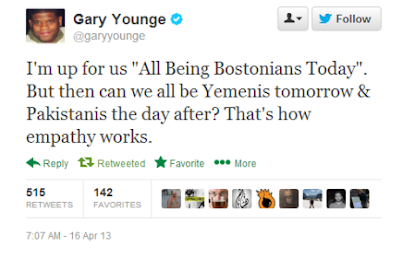 It would be expecting too much for the large majority of Americans to be concerned about Yemen or Iraq just as Iraqis and Yemenis would not empathise with America; for most of them, their contact is with US forces sent to protect them.  It is not incumbent upon the citizens to rationalise. This is the job of the government, and political expediency demands creating a fear psychosis. None of the countries the US has intervened in has benefited from its democratic ideals.


“The rush, one might say the eagerness, to conclude that the attackers were Muslim was palpable and unseemly, even without any real evidence. The New York Post quickly claimed that the prime suspect was a Saudi national (while also inaccurately reporting that 12 people had been confirmed dead)…Anti-Muslim bigots like Pam Geller predictably announced that this was ‘Jihad in America’.”

The victims of this so-called jihad are largely Muslims. I do not know what sort of religiosity would make them target their own places of worship, their own people. This is proof that their ideology is to use the name of a faith, much as others use the patriotic card to whip up xenophobic sentiments. It is, indeed, the job of investigators to question people, but getting hold of a Saudi national immediately and then making it public does convey that it wasn’t about investigations; rather, it does seem more like a gotcha moment. Osama bin Laden is dead. The Al Qaeda is not a unified group anymore. I do not need to emphasise again that George Bush was quite friendly with the House of Saud and Osama was himself a tactical weapon of the CIA during the Russian war in Afghanistan.

“Recall that on the day of the 2011 Oslo massacre by a right-wing, Muslim-hating extremist, the New York Times spent virtually the entire day strongly suggesting in its headlines that an Islamic extremist group was responsible, a claim other major news outlets (including the BBC and Washington Post) then repeated as fact. The same thing happened with the 1995 Oklahoma City bombing.…in US political discourse, "terrorism" has no real meaning other than: violence perpetrated by Muslims against the west. The reason there was such confusion and uncertainty about whether this was "terrorism" is because there is no clear and consistently applied definition of the term. At this point, it's little more than a term of emotionally manipulative propaganda.”

I have often wondered why this does not qualify as a conspiracy against a community when so many conspiracy theories prevail. The Atlantic Wire mentioned the Boston Police Department's final press conference where Dan Bidondi, a radio host for InfoWars, asked:

“Why were the loud speakers telling people in the audience to be calm moments before the bombs went off? Is this another false flag staged attack to take our civil liberties and promote homeland security while sticking their hands down our pants on the streets?”

To further quote from the piece on what a "false flag" attack is:

“The term then expanded to mean any scenario under which a military attack was undertaken by a person or organization pretending to be something else. What the questioner was asking, then, was: Did the United States government orchestrate this attack, pretending to be a terrorist organization of some sort, in order to justify expanded security powers?”

I would understand if the manipulative machinery projected the view about “devices found”, “threat perception”, “intelligence reports”, or even conducted a mock exercise. I very much doubt if the US government would endanger the lives of its people to actually organise an attack. It will most likely want to create fear among the citizens, and that should be enough to grant it the privilege to use its security powers. It has used 9/11 as a propaganda ploy, and this has worked because the United States was not accustomed to being attacked on this scale.

Does a nation go on the offensive against countries where the perpetrators could be without any evidence? The runners are innocent and so are the villagers who live under threat of drones. The point is no one should be stuck on empathy. We cannot feel the pain. And, for all his genuinely balanced opinion, Greenwald too when speaking about ethnic groups feeling alienated added, “even though leading Muslim-American groups such as CAIR harshly condemned the attack (as they always do) and urged support for the victims, including blood donations”.

This is the problem. You have to state it loud and clear. Stand on the soapbox and declare that your heart is clean and you care. It would be so much better, and convey the true spirit of America, if these people were not boxed into a group, and instead seen as US citizens like any other. Here, it sounds as though they are being granted the magnanimity of being ‘like us’, and not ‘like them’.