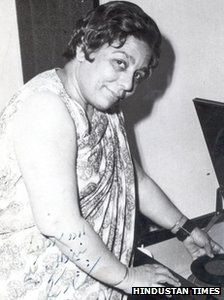 Shamshad Begum had 'died' so often by rumours of her demise that when early this week she passed on I could merely think of one word that truly encapsulated her for me: the 'other'.

As a youngster, whenever her songs were played and people at home seemed to enjoy them, I would think about all those who mimicked her by holding their noses. The top notes of her voice are indeed nasal, but if you just wait and get drawn into the depth you can trace the plaintiveness that suggests walking the razor's edge.

She rarely sang for the female lead. She became the voice of the other woman, in more ways than the typical one. There was a challenge in the way she sang, saucy and irreverent. “Duniya hai mere peechhe, lekin main tere peechhe (the world is after me, but I chase/long for you)" or "Kaheen pe nigaahein, kaheen pe nishana (the eye looks one way, but aims darts another elsewhere)"

This quality shone in this 'Mughal-e-Azam' qawwali. I watched it a few years ago in its tarted-up colour version and was blown over by the fact that Lata Mangeshkar may sound like the nightingale, but Shamshad Begum at least in this one recognised the battle. Prince Salim had pitted the slave woman and the courtesan against each other. You can sense the hunger in Shamshad Begum's voice, wonderfully enacted by Nigar Sultana. There was a complacency in the Madhubala-Lata combination that relied only on lyrics.

Since the prince could not decide, he presented Nigar with the flower and Madhubala with a thorn. Her riposte is now part of 'dialogue' lore when she said, “Kaanton ko murjhane ka khauf nahin (thorns don't have to fear withering)".

She was the heroine. But I can sense the edginess in Shamshad Begum that would have crushed the rose even before it could die.