Will Tytler get away again? 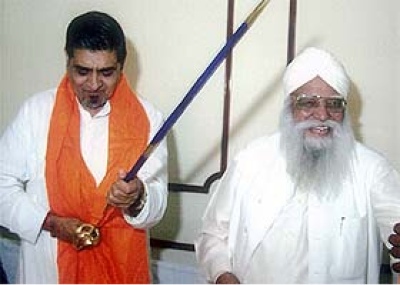 The re-opening of the case yesterday against Congress leader Jagdish Tytler for his role in the 1984 anti-Sikh riots could prove to be a boon for the party. Just when it has to deal with those pesky Wikileaks revelations about Rajiv Gandhi's middleman role in procuring fighter jets, it can flash the Delhi Court order as serious intent to seek justice.

Tytler, along with Sajjan Kumar and H.K.L.Bhagat, was largely responsible for what happened in the aftermath of Indira Gandhi's assassination by her security guards, who happened to be Sikh.

What followed was not only genocide, but complete misuse of power. It has been typical of governments to target innocents when they fail to deal with a group's demands or aspirations. It was no different in the case of Sikhs. It was, anyway, the Centre's misguided attitude that resulted in Operation Bluestar. And even if the then prime minister was killed because of disaffection, it had nothing to do with the community, and most certainly not the way a ruling party uses the system to decimate it's citizens.

If it got its ministers and the police to do its bidding then, it continued having a hold on the Central Bureau of Investigation. Therefore, the mere reopening of the case against Tytler, who was exonerated, ought to raise more questions than to result in jubilation.

The Delhi High Court cannot possibly serve as the final stop. It has directed the CBI, which will have to clear its own mischief (what we politely refer to as error of omission) first. Not only did it claim he had no role once, but twice - in 2007 when its closure report was rejected and in 2009.

Three murders and the absence of key witnesses in court (they had moved to America) does not prove innocence. Yet, the Congress let him contest from New Delhi, the city of his crime. Why was he not answerable? There are many ministers from various parties who have a criminal record, but this somehow becomes public knowledge. In Tytler's case, the knowledge itself is brushed away, clearly revealing a tony old boys' protective ring.

He had even talked about his emotional incarceration: “It is very difficult to explain what I am going through. Nobody understands that. But after 22 years of fighting false charges, I am thankful to god. I knew from the very beginning that the affidavit was full of lies. Why else would somebody file an affidavit 22 years after the incident happened. I was not even in Delhi on the day of the first incident and was in a TV studio on the second day. But the media hyped that conspiracy to such a level that it dragged on for so long.”

The CBI had said he was not in the gurdwara, where the three men were killed, but in Teen Murti Bhavan, which happens to be in Delhi. And what was he doing in a TV studio the next day? Why was he not helping to quell the mobs?

There are many images that have stayed, whether in the media or through stories related. Of people being beaten up. Of local bullies being paid to kill. Of people fleeing. Of men throwing off their turbans and cutting their hair. Or women and children that remained in camps. Waiting. Justice became a matter of survival. Food. Clothes. Shelter.

I still cannot get over the fact that despite this horrendous black mark, Rajiv Gandhi - the one who explained the murderous rampage as “when a big tree falls the earth shakes" - took over as prime minister in what has been called a ‘sympathy wave'. No sympathy for the hundreds dead.

The police seemed to follow political instructions, but there was this photograph of Kiran Bedi, lathi in hand, fighting a mob. Was she the lone rebel?

In later years, as Director General of Police, K.P.S.Gill took charge of dealing with terrorism in Punjab. I still remember a senior media person writing after Gill's infamous bottom-patting of a woman IAS officer that this should not result in any serious punishment as the ‘supercop' was a national asset.

One must also realise that no group is above political expediency. The 2004 photograph of Tytler is one such example. As Union Minister of State he was honoured with a 'siropa' by Delhi Sikh Gurdwara Management Committee President Prahlad Singh Chandok at a function.

It only shows that those holding positions of authority can forget and be co-opted easily with the promise of a few sops. The ordinary people need to raise their voices. Closure must not wipe out history. 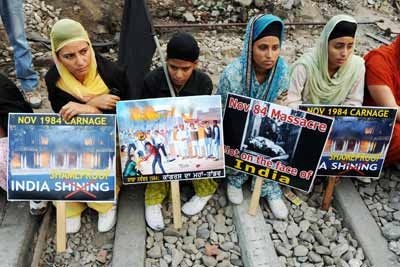