It is no less than an edict, one which has prompted me to say, "yes, Prime Minister, but..." 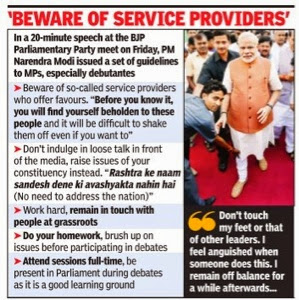 Narendra Modi's advise to the ministers sounds school-marmish. Do they have any merit? Some do, some don't. His media-related comments are more important than the rest. Here are two quotes from separate reports:

• Sources said the Prime Minister also asked the MPs not to talk to the media as spokespersons of the party but raise the issues of their own area and constituency with them instead.

• The Prime Minister also advised the parliamentarians to refrain from giving comments to media on national issues. He said they should be polite while dealing with the media.

I completely agree. In the past few years, ministers have struck out on their own during primetime and hurt the party they represent. The ill-timed sound bytes have only given anchors a 'debate', and the issue those remarks are for is soon forgotten. The cacophony coterie thrived in this environment, and became known for outspokenness or idiocy, depending on which side they were on.

The fallout was retraction the morning after. More debates on being misquoted. More TV and print time. It did not matter what the subject was. From coal to land sharks to rape, these made up the rogues gallery. Other panelists, mainly from the media, shared a camaraderie with them. This ensured both got what they wanted — a story.

Most of them lacked expertise in the subject, and were there only due to their availability on speed dial. Why did they come to the studios night after night to be shouted down by anchors? And what did they do? It invariably ended up with the spokespersons protecting their leaders. A Catch-22 situation, no doubt.

It served no purpose. Even offending ministers were back, smiling or sneering, after being anointed/insulted by a media person whose own expertise came from the research done by her/his team. People elect leaders, not journalists. The former owes them responsibility and self-respect. They represent us.

In sensitive cases, there is also the danger of a preemptive remark interfering in a judicial probe. Not everybody is in a position to discuss national or international issues with any degree of conviction, unless they are directly handling that portfolio and have hands-on experience or have worked in the department.

What we know now is which party members are the favoured ones on what channel, which ought to be anathema for freedom of the press. We recall their quotes. Let us not forget how Mani Shankar Aiyer's "chaiwalla" comment gave the BJP and its then PM candidate a new identity, an emotional handle. The quotable quoters are elitist, as is the media that projects them.

Is there a flipside to this? Yes. Since the media is not terribly interested in work done in constituencies, for want of ministers to pin down they might not cover issue-based controversial news as much. Or, if they do, it might become a free-for-all with decoys speaking on behalf of the party. This will provide an easy exit for the head office. A shrug will suffice. If the PM is serious, he should have a team of dedicated spokespersons who do as much homework as he expects from Parliamentarians. 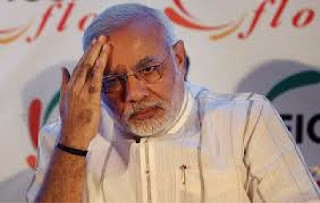 Another reason I welcome this media 'layoff' is that the ball will be in the court of the PM. It is his diktat, his choice to stay away, his ministers are responsible for everything they say.

The media, in fact, has the upper hand here. For every Giriraj Singh utterance, they can go straight to the PMO.

Is the directive dictatorial? No. It would be if there is a complete disconnect between the media and ministers. The media is not being muzzled. As someone who has been right in there, as also an avid objective and, need I emphasise, cynical observer, newspaper and TV journalists will have to rely on independently-investigated stories. It is no secret that 'sources' are often dissenters or opponents. The information is fed to the media, and that becomes a 'scoop'.

Is there a flipside to this too? Yes. The ministers who won't talk about national issues might try and whitewash a few glaring stains in order to please their leader. They might then not feel the need to address the problem because it is not visible, and there are no checks on it.

This does not sound simple because it is not. Therefore, I've tried to give two arguments.

Regarding the other diktats, they are self-evident. Except that doing away with sycophancy is not restricted to dissuading feet-touching. It is good as symbolism, though. We did see Modi during his campaigns touching the feet of elderly voters, and on his first day in Parliament touching the steps of the "temple of democracy". Such gestures are unnecessary, precisely because of the nature of our democracy.

His comment on 'service providers' is interesting: "Before you know it you will find yourself beholden to these people. And it will be difficult to shake them off even if you want to."

Is this restricted only to the ministers in his cabinet? What about the industrialists? He does know there is no free lunch, right?

One cannot also ignore the fact that his short lecture to the ministers came after he superseded them to meet the bureaucrats alone. It is one thing to help streamline procedure and quite another to be the sole authority. I am afraid, but a mindset cannot alter overnight. Bureaucrats are accustomed to pretending to take orders. You give them a carte blanche to handle things and they might change, but only superficially. Instead of going through a layer of benefactors, they will now feel empowered to be answerable only to one.

Narendra Modi is a man in a hurry. That is the problem. He is too busy cutting off branches and painting flowers on the trunks of trees.

Report sources:
Indian Express and IBN
By Farzana Versey at 9:00:00 am