Dance of Discrimination: Non-Hindus and Navratri 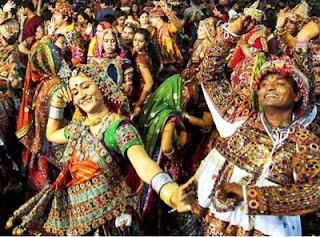 Last evening I could hear yodeling, interspersed with the beating of sticks to rhythm. The Navratri season is on, and open spaces become the playground of festivities.

Garba is not alien to me, and even less so to a couple of generations before mine. My Nana was said to be quite a dandiya player, and this has special significance because he died when my mother was very young, and he was her hero. Later, during events at the jamaat khana the garba-dandiya were an integral part of celebrations. As a teen I recall one such that lasted till the wee hours of the morning in a place I only recall as 'wadi'. When my cousin got married without fanfare, my grandma insisted we celebrate on our terrace. The highlight was the garba — and we weren't even dressed for it.

Does it upset me to read about how non-Hindus and more specifically Muslims are being prevented from participating in the Navratri festivities? The VHP issued a diktat. I read some truly sad accounts by Muslims in Gujarat who traditionally sang at venues who were now feeling totally alienated, even insulted.

Posters have come up announcing it. However, a Gujarati newspaper did report that the CM Anandiben Patel has said that if Muslims are not allowed then the permits of the organisers will be cancelled. The English-language press has made no mention of it although it continues to pile on about the ban.

The unfortunate bit is that this gives the VHP enough leeway to sneak in that they are responding to what a mullah said. Mehdi Hasan Shah Baba said such rituals were associated with demons.

One question is about whether religion and public celebratory rituals should be closed affairs. Will Muslims bow before the goddess if they wish to participate? This one is tricky. Such conditions can be laid down if it is a place of worship, not a public space. The problem is with the altered exclusion.

It makes little sense when the garba venues play contemporary music, hold competitions for the best dressed, the best couple and other such. Huge amounts are spent on clothes and jewellery. Many of these shows are sponsored. And now we also have participants tattooing, wearing masks and paying tribute to Narendra Modi. The goddess is incidental. 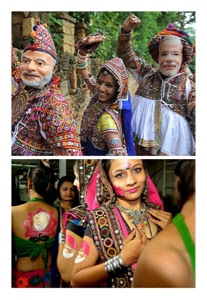 Muslims in Gujarat would not really shy away from building up such a cult. Modi and they have a rather cosy relationship. In fact, that is one reason I believe, aside from the nature of the diktat and the attitude, this is not really a Muslim issue at all.

The media and the elite social media are essentially taking up the cause of the well-off Muslim in this case. One is not suggesting they should not, but let us not conflate it with the Muslim issue and thereby the issue with Muslims, which is a thin line away. Those living in ghettoes and the poor do not have the luxury of participating in Navratri celebrations at the targeted venues because they cannot afford the ticketed events. They might also not fit into the clique version of pluralistic and secular.

The CM is aware that the BJP depends on the rich and the trading community, so her creditable statement is inspired by pragmatism. These Muslims have voted for Modi before he became PM. They know it is barter, and they have reconciled themselves to it.

While discrimination on any grounds should be anathema, how many will remember this nine days after the festival? What is happening now is passively picking up the signals that the Sangh Parivar sends out to bolster its own image.

(The prayer I sent
Has so hit the sky
That it has ricocheted back as a sigh)
By Farzana Versey at 7:18:00 pm