Humanising the Inhuman: Of ISIS and a Rapist 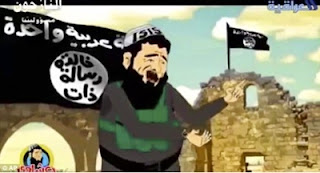 After the news, what we look for is the people who make the news or are affected by it. Human interest stories have always been attractive to the readers as well as to those who have a stake in the news. The latter because they know that although facts cannot be fudged opinions certainly can be. There is also a strong need to dispute the prevailing discourse on the 'newsy'.

Satire is a handy and potent tool to make a point. However, is all satire successful in doing what it is supposed to — expose clay feet and demonise the devils?

Comics and cartoons in response to the ISIS in the Middle East media are now seen as a weapon against the terror group. One can understand the need for such a release of frustration and anger. But do they really manage to reach home?

Let us take a few examples.

The Looney Tunes-style cartoon depicts a hapless young ISIS militant struggling to carry out simple tasks; first dropping a rocket launcher on to the foot of his commander before accidentally shooting him when he holds his weapon the wrong way round while firing towards an Iraq military checkpoint.

This works as nervous laughter for the audience, but the reality is not about fumbling. The mistaken killing of the commander, in fact, consolidates the martyrdom that is so desired.

They mock the jihadists' radical ideas and portrays the group as obsessed with a literal interpretation of 7th Century Islam that makes their lives needlessly difficult. One producer said, "These people are not a true representation of Islam and so by mocking them. It is a way to show we are against them."

A group such as the ISIS is not dependent on what people think, but how it can market its own ideology. Nobody knows what really happened in the 7th century. If people want to oppose the ISIS, then they must do so for reasons of their social and political terrorism. They are using modern technology, so mocking them about the past sounds disingenuous. Besides, there is a problem when a people feel desperate about distancing themselves for what they get associated with by default from societies that are prejudiced against them. It only serves to highlight a moral dilemma that isn't even there.

Even the sickening videos of mass shootings conducted by ISIS have become comedic fodder. Palestinian television channel al-Falastiniya aired a skit showing militants shooting Muslim civilians for their lack of piety, while simultaneously reminiscing about partying and meeting beautiful women while training.

I find this particularly disgusting. In trying to draw attention to the hypocrisy, it only conforms to a stereotype that the ISIS and other fanatic elements might find enchanting. It conveys that the rewards are a result of the killings. What sense does it make when such vile characters exist only for such fruits of labour? Also, rather unfortunately, the subliminal message is that lack of extreme piety deserves an extreme punishment. The victims are as much grist for the satire mill here as the predators.

When a Jordanian Christian approaches, the two militants begin fighting each other over who gets to shoot him - each wanting the 'blessing' for himself. Terrified, the man suffers a fatal heart attack, leaving the militants devastated.

What do you learn from this? That a person marked has to die. Anyway.

Of course, all is not bleak. This skit by the 'Ktir Salbe Show' hits the right spot. Even though it falls in the disingenuous trap about the past, it manages to make a potential victim proactive and in charge:

A taxi driver picks up a jihadi who rejects listening to radio because it didn't exist in the earliest days of Islam.

The driver offers to turn on the air conditioning, but that too is rejected. The jihadist then criticizes the put-upon driver for answering his mobile phone.

Fed up, the driver finally asks: 'Were there taxi cabs in the earliest days?'.

'No, 1,000 times no!' the passenger answers. The driver responds by kicking the jihadist out of his car and telling him to wait for a passing camel instead.

* * *
The other sort of behind the news stories are all about humanising, including the villains. This is appealing because it is about penance and reformation. We like to judge and to forgive.

When I read this article on the young man who was one of the rapists in the Delhi gangrape I was confused. Several criminals serve sentences or are sent to correctional facilities (as this one is), but nobody wants to trace their progress. This man's story is bound to be humanised because he is a crucial part of the bigger story that was on primetime for months. That one was milked and through him will continue to be milked.

As a juvenile — and whether we like it or not, he was tried as one — he is serving time in a reform centre. The job of such a place is to rehabilitate him. One can understand the anger against him, but every day people are let off by the courts, if at all they are reported, for similar crimes. We remain silent, if not unaware. Besides, even those who get sentenced for a few years will ultimately be out and one does not know whether a jail term has given them a lesson that would have changed them.

The media is always looking for angles and twists not to make people aware, but to tug at them. By telling us that a criminal is having it better after arrest we are fed what we already know. I also found the piece disorienting for reasons other than humanising. It makes our correctional facilities sound like Doon School prototypes or something out of a Karan Johar film. And the guy who knew no English has titled his painting "The Princess". 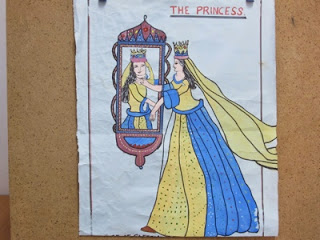 Something else bothered me:

There is “no trace of anger” in him, says psychologist Shuchi Goel, who works with him and has conducted an art-based therapy session. “He is certainly putting an extra effort to become acceptable to others,” she said. “He takes a lot of pride in his paintings.”

Without an explanation to back the statement, what exactly does lack of anger in him mean? Who should he be angry with — his victim, his accomplices who are sentenced to death, or himself?

For those of us who believe that justice should not be a hammer but a chisel, this sort of pop analysis defeats the purpose by pandering to the gallery version of the humane.