Fake Feminism and the Alamuddin-Clooney marriage 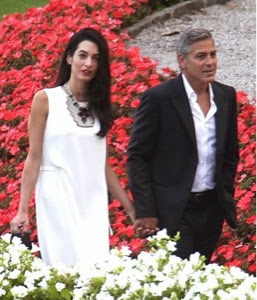 A few months ago, somebody sent me a YouTube link to "the woman they say George Clooney is getting married to". Amal Alamuddin was discussing human rights. The feminist who forwarded it could have just sent the link, perhaps adding the subject of the discussion. It intrigued me that the 'connection' of the subject needed to be mentioned at all.

You are probably thinking what I asked myself too: would I have really been interested in watching the clip otherwise? To be honest, less so with as much immediacy. I did not know anything about her, and it is stupid to pretend otherwise. She lives and works in London, and as a legal luminary she is not — or was not — a subject of pop culture, which is what is fed globally.

I did not expect her not to be good, but she was indeed impressive and somebody I could trust with opinions. It did not mean I would forget who she was betrothed to. These were not antagonistic realities, and could run parallel without either jousting the other for space.

Amal and George are now married. They seem happy and look good together. That would have been my views on what has now become a celebrity wedding.

However, the link sender I mentioned at the beginning has found an echo in this headline:

If the idea was to laud her, it falls pathetically flat to a discerning observer. Mentioning the two by their professions is stating the obvious. The motive here is to show her as superseding him, which is the trope patriarchal notions thrive on — of the spouse as competitor, a threat who needs to be envied and therefore tamed.

There is a good deal of undercurrent here. The taming might be almost invisible. The article that goes with the headline concurs with Clooney's earlier observation that he was "marrying up". I have serious issues with such social mobility, and one is aware of how women are often accused of "getting a good catch" or relying on the "sugar daddy".

This is particularly galling if you consider that the man may genuinely think she is too good for him, but in the popular imagination it strikes one as him legitimising her superiority, and therefore acceptable to those holding forth. It is quite likely that this site is doing what the man believes is okay. They have his tacit approval.

Little is known of Amal’s earlier relationships (we assume she was climbing that corporate ladder and smashing glass ceilings) but she’s tying the knot with an actor, whose name is George Clooney, we’re told.

They are desexualising her as somebody who cannot have a personal life because she was busy proving herself. Would they ever day that about a man? Any man?

We only hope he doesn’t hold her back from conquering the world. We think this George Clooney fellow has scored big time.

Were they interested in her before this? Have they written about her earlier, and in such flattering terms, which would be deservedly so? And by suggesting that he might hold her back, they are playing into such an old stereotype that ends up reducing her to a puppet who can be held back.

They are only now scrounging for her pictures because of who she is with. It might have helped if there was honesty rather than facile attempts at pseudo feminism that doles out crumbs by way of cheesy headlines to prop up what does not need props. Or quoting Julia Roberts praising her for her to be seen as a legitimately accomplished person.

Cheap parody and sophomore trickery can't take you very far as feminists or humanists. It just can't take you much further than your celebrity-assigned blinkers.
By Farzana Versey at 8:29:00 pm