Sterilisation or Sexism: The Opportunistic Battle for Primetime 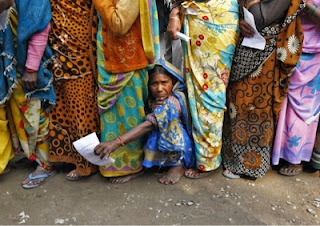 One did not realise this was about competition, that too of the superficial kind. The celebrated anchor moving on to the sterilisation deaths in Chhatisgarh said, "Now to our next. This should be the first story across news channels..." Amazing. Why did he then choose to feature it after the 'girls not allowed in AMU library' and 'Abhishek Manu Singhvi spending Rs 5 crore on laptops' stories?

Are news items about what comes first, and if so who is in a position to judge others when they themselves do not follow the rules of conscience? Do the issues matter or not in this oneupmanship?

What happened in those sterilisation camps is really the sad state of affairs in our health sector. Hopping mad is not a solution, neither is demanding quick-fix action or primetime space. Indeed, dissemination of such news is important if only to make people aware that they cannot be confined to the la-la-land of full HD, but live in a larger world. One hopes such news also reaches those not leading such an existence, potential victims who need to be alerted.

According to this Guardian report, between 2013-2014 four million operations were performed; in a nine-year period between 2003-12, 1,434 people died due to such surgeries.

On November 8, some women were forced to attend the camps:

More than 80 women underwent surgery for laparoscopic tubectomies at a free government-run camp in the central state of Chhattisgarh on Saturday. About 60 fell ill shortly afterwards, officials said. At least 14 were in a very serious condition by Wednesday and the death toll was expected to rise.

Force is one of the factors that make it difficult to stem the problem. Reminds me of the horrible Turkman Gate surgeries helmed politically by Sanjay Gandhi during the Emergency. More than meeting targets, it was an assertion of power as it continues to be in some form.

India has to control its population. No question about it. The government cannot target the rich and the middle class, and perhaps due to education and a better living standard the "another hand to work" argument does not apply here, although the gender disparity is no less among these classes. So, invariably the poor are targeted. They are offered a small compensation, which they may or may not get.

Health workers are supposed to meet targets, and this results in a race, ignoring the health status of the women and whether they will be in a position to undergo the operation. The onus is on the women to control the population. This aspect is not addressed with enough seriousness, given that women are malnourished anyway and hardly in a position to demand a child. Childbirth is not easy for those who are expected to ensure that a boy child is born, or else they would have to bear the consequences.

This needs intervention, more than forced sterilisation. We cannot blame it on patriarchy and sit back to watch.

Talking about patriarchy and sexism Zameeruddin Shah, the Vice-Chancellor of Aligarh Muslim University (AMU), got himself into trouble for saying that if the main library was opened up for women then four times more men would visit it. The Times of India read "attract" to mean attraction between the sexes. It was an alarmist report. However, the response to it is no less alarmist.

The V-C saying more young men would visit if women were allowed implies they would do so because of them. I don't think there can be any dispute over this. It does not mean that AMU as an insitute of learning is backward; it just means that the V-C made an uncalled for comment. There was bound to be a reaction.

National Front of Indian Women general secretary Annie Raja said, “This shows the diseased mindset of the V-C. He is not fit to sit in that position. They should address the question of infrastructure rather than stopping girls. The library is meant for all students.”

“The issue of permitting undergraduate girls will have to wait until we create necessary extra space. Once the infrastructural issues are resolved and arrangements for safe transport for girls are made, we would certainly have no objection in permitting these girls have access to the central library. We are not at all sexist. We want women's empowerment and certainly don’t want to segregate our girls."

Many universities in India come up with weird rules, whether it is for what women should wear, whether they should be allowed to carry mobile phones, speak to men, be segregated. These incidents get widely reported, and nothing comes out of it, absolutely nothing. Each time a sexist remark is uttered, you will see the people who ought to be punished on TV justifying what they said. Those who would have been forgotten end up as newsmakers. Unless such news ensure that action is taken against the perpetrators, it just adds to the imbecility of discourse.

Oafs circumambulate their lives, and drive their opinions. AMU has students from all communities and faculty from all communities. The V-C is a former armyman and his faith ought to be of no consequence if he has said something that is cause for pause. One gets the intent quite clearly when "liberals" are deviously tagged along with "Muslims", conveying that the libs suffer a similar fate when they take up the Muslim cause.

If such people want to hit out at the BJP, then they should learn to aim and not use the shoulders of Muslims to fire the gun. The HRD minister Smriti Irani did jump in to respond to the V-C's remarks by saying it hurt her and agitated her. It is a political ploy, there is no doubt about it. But, did she speak about AMU being medieval, or Muslims and Islam being medieval? Even had she done so, she is a politician. What are these self-labeled opportunistic liberals?

They have a nice coterie to protect them. Suddenly, with the magnanimous gestures so typical of majoritarianism — "some of the most intelligent/progressive people we know are from AMU" — adding to the noise, it was about how AMU was a grand institute that was being slaughtered, when sterilisation deaths should have been given more attention. (In doing so, they did not realise that they had fed the frenzy, to begin with.) The media was blamed, often by other media persons. It has stopped being funny. This is just competitiveness for space. The fence sitters are always poised in such a way that they fall on the cushioned grass where they are butt-safe.

What I would like to hear about is how the Chhattisgarh deaths are about medieval practices of modern medicine that India continues to use. This should be drummed into our heads, and it does not mean we need to ignore sexism elsewhere for it.
By Farzana Versey at 8:27:00 pm