The court of yarns

The other day, I was in court. I needed stamp paper for some official letter. It was a little after 9 am. A busy day had begun. Shops opening shutters, pedestrians walking purposefully towards train stations and bus stands, cars honking. It had the look of rush.

As I was about to enter the court building, it seemed as though life had stopped. I couldn't move. One side of my sandal had given way. I'd have to limp. I chose to pick up the sandal and pull out the dangling sole. Quite nonchalantly I wore it back. That's when I heard a short laugh. A lawyer. I smiled back.

Suddenly, as if the silence had been broken by a click of the heel, I found about six men in coats offering to notarise and legitimise any form I'd give them.

It was a sad sight. These men (no women were around) had earned a law degree. Yet, they were reduced to hawking their services in the streets. Think of the disparity between the uncertainty of their jobs and the famous lawyers with their well-appointed chambers earning in lakhs for just a one-hour consultation.

I stood near the lift and asked where I'd get the stamp paper. "After one hour," said a man chewing paan.

I decided to go up, anyway.

It was dark on the floor. "Kya?" I turned around. A peon wanted to know what I wanted. "Aadha ghanta baad," he said. It was progress. From one hour my wait had reduced to half. There was a room to the left. I stood at the door. A big-built man in a white bush-shirt smiled. "I am looking for stamp paper. May I wait here until they open the counter?"

He invited me in and motioned towards the chairs near the windows. It was bright, so bright that every speck of dust on the tables was visible. For the next 30 minutes, I watched. 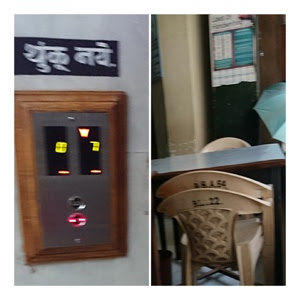 Plastic chairs were stacked over one another and some staffers sat on them in their stacked state. Umbrellas were opened to dry, even though it wasn't raining. The sweeper began work, and dust flew leaving a temporary cloud of smog.

There were lockers with names of lawyers. One of them entered. There was a picture of a deity on his locker. He bowed before it. Then he brought out his papers, locked it again, and bowed before the image once more before sitting down to open the files.

This was repeated by at least two other lawyers while I was there. One of them, after performing his religious duty for the day, did not seem too happy with my presence. I might have intruded into his private space, and although I had tried not to gawk, I'm sure even a sideways glance would have bothered him.

It was nearing 10 o'clock. I went to the counter. "Five more minutes," said the woman. I went back to my window-view seat. The room had filled up, everybody was working, yet there appeared to be slumber in their air. It reminded me of holiday afternoons of my childhood where everybody was busy reading, knitting, playing cards, or just snoozing.

I realised it was past ten. There was a queue at the counter. This was unfair. Would I have to go and stand in line after having waited this long? No. I was asked to go to the other side. The task completed, I returned to that room and sought out the gentleman, a clerk, who had let me sit there. "Any problem?" he asked.

He shook his head all around and spread both his hands and said, "Work done? Good, good."

I stood near the lift. A board in Marathi read, "Thooku naye." Do not spit. The peon made a fixing lightbulb-like gesture. "Neeche nahin jaata." No lift to descend. 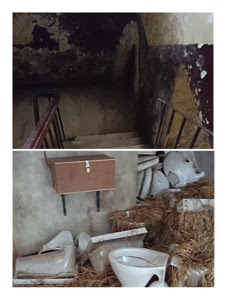 With sole-less shoes I started on my way down. The staircase walls were peeling, the steps were dirty. As I reached the ground floor, I was shocked. There were commodes and a flush tank. Hay and cardboard were spread around. These must have been the toilets. A woman was sweeping. She kept sweeping into the spot and from it. I waited on the second-last step. She saw me and gestured that I could pass.

In less than an hour I had experienced without barely any verbal exchange the lives of a few — from their worship to the way they drank their tea, from the dust on their files to the sweat on their faces, from umbrellas drying to eyes squinting at the sun. Lives we pass by everyday without pause for thought.

And to think that all I needed was a stamp paper that would certify an identity.