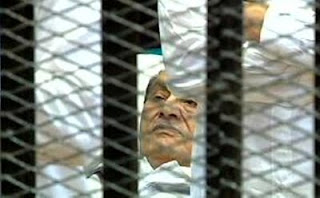 Is this a zoo? Or a scene from one of those stark message films?

There is jubilation. Hosni Mubarak, the ousted Egyptian leader, together with his sons and seven others, has been confined to a steel bed behind a cage. The trial is on.

He was a despot, they say. They tolerated him for decades. He certainly was power-hungry, stashed away ill-gotten wealth. But Egypt did not initiate what has come to be called the Arab Spring.

The public display of anger has resulted in the death of innocent people. The uprising still does not have a direction. In such circumstances, civil society resorts to its baser instincts. Recall how Saddam Hussein was captured and tortured purportedly to save
America with the added glow of ushering in democracy in Iraq. Has that happened?

Will all those who like this sort of inquisition accept that this justice is taking place in a 'backward' society? A society they berate for 'inhuman' justice methods?

Mubarak was bad for his own people. What about those leaders who trample on others and make it seem as though it is to protect their nation and the world?

Will you see this happening in the West even when their leaders are caught in scandals and tax payers are doling out hard-earned money for defence based on delusions?

Will this happen in India where we are steeped in scams and even the prime minister is implicated by default? Will we see those leaders behind such a cage, the ones who watched when riots took place and they looked the other way as their loyal cops followed their instructions? Will people watch as they are questioned? Will our system even permit it?

The answer is No.

So, why must we jubilate over this form of vicarious justice when we watch the 'dignified' western leaders behave like tribal chieftains and our own pretend that slings and arrows only give them a tragic aura?

I am uncomfortable with sights such as the one Hosni Mubarak is being subjected to. And I can already imagine that a few months down the line some self-righteous American leaders will express disgust over such an 'uncivilised' display of justice.

Then, will someone tap them gently and remind them of Saddam?

We cannot remind then of Osama the invisible. Now there are long stories by the unidentified man who pulled the trigger. The President of the United States of America does not know his name. An operation that was conducted with the Pentagon's active participation is mired in secrecy. It is made to look like the United SEALs of America.

They had said at the time it would have been difficult to bring his body. Now they say they did not want any detainees.

They had said then that his face was unrecognisable and too gory for the pictures to be released. For someone who got one bullet on the chest and one near the eye, one wonders about the level of impact that might have made him unrecognisable. Now they say the intelligence officer unzipped the body bag and confirmed it was Osama. How?

Anyhow, the epic story is being lapped up. And what does Barack Obama reward the team of commandos?

A measuring tape. It seems they did not have one with them when they got the "most dreaded terrorist". So, to certify Osama's height, one of the team - a six foot guy - lay down beside the corpse and they figured he was four inches taller. All this to prove what the world knows to be his height. Smart. But they could have carried a little
ruler at least.

We know about the code word. America must learn that country means just one country. Keep your war on terror to yourself. Don't export it. And since you've brought in god, live with your own holy war. Carry your 'jihad' mirror wherever you go.