They talk about the second independence. It is really another partition of the country – a partition that will last until the next popcorn episode of the soap opera.

Sonia would have handled it with greater maturity, are the whispers doing the rounds. The Hazare cabal is giving us titbits about which minister is more “pliable” and it is supposed to be a good thing. We, who complain about lack of spine in our leaders, now want them to bend over backwards.

This push-the-buttons sort of democracy is detrimental, and now we have sheer desperation:

Prime Minister Manmohan Singh on Thursday paid fulsome tribute to anti-corruption crusader Anna Hazare, calling him the embodiment of “our people’s disgust and concern about tackling corruption” while defending his own record by inviting the opposition to scrutinize properties he or his family members had acquired in his 40-odd years in public life.

No, Sir, he is not. Where was he when Bofors happened? Would the PM say the same thing had he raised that bogey? The people involved here are not disgusted with corruption but how they cannot get their way despite it being around. Big businesses have thrived on corruption – getting permits for their industrial units that they know will go beyond the limit allocated. These corporate houses have the most corrupt practices going on. Newspapers that take money to splash photographs are joining the crusade. Doctors, lawyers, teachers who give ‘extra tuitions’ often transact with cash – does anyone know how much of it is accounted for? And these are the ‘angry people’.

Why should the leader of the largest democracy have to kowtow to an individual? And why is he “hurt” over his reputation being sullied by a bunch of performers? These are ‘non-state actors’. Why was the PM not concerned when there were misdemeanours committed earlier?

“In the course of seven years as prime minister, I may have made mistakes. Who is above making mistakes? To err is human but to accuse me of evil intentions, of conniving at corruption is a charge I firmly repudiate.”

Fine. But as the prime minister, it is not only about him. It is about the whole system, and that includes the sabre-rattlers at the Ramlila grounds. Manmohan Singh has erred by not acting on several occasions. So, why this need to act now, and for whom?

“I respect his idealism. I respect him as an individual. I applaud him, I salute him. His life is much too precious and therefore, I would urge Anna Hazare to end his fast.”

What a sorry comment. There is much of this in op-eds, and I wish people would just say it. Anna Hazare’s movement is opportunistic, and an arrogant one at that. It is being marketed as idealism only because people are gathering around. Every life is precious. As the PM he should be concerned about the many unnecessary deaths due to basic lack of health facilities, due to the heinous crimes committed in the name of religion and honour, due to patriarchal attitudes, due to quiet deaths in prisons. If anything, this shows that those people are not corrupt enough to bribe their way to avoid death by torture. What does the PM have to say about it?

Nothing. Instead we get this:

“…in the two-and-a-half years that is left to us, we will do everything in our power to clean the system of this country.”

Besides being an absolutely ridiculous statement, he appears to be making himself answerable to a group of people who have not fought an election. Does anyone have details about the ‘aides’ – who they are, their source of income, their past record, their future plans?

One of the reasons our PM is trying to work this out is that his constituency is largely made up for these people. The educated, the ‘sensible’ middle clsss and the ‘sensitive’ rich. When was the last time you heard about the small grocer, the farmer, the cobbler bribing anyone?

Has anyone seen the ad for some chips where there is a rally and spotting a pretty girl Saif Ali Khan goes up to her and says, “Candle-light vigil ke baad candle-light dinner?” She is charmed by his munchies. They go crunch-crunch together. The poor ad agency must have thought it was doing a public service campaign, but it has revealed the true nature of this hollow movement’s exclusivist nature.

If it is fairly certain this government does not have a chance, has anyone thought about the alternatives? Will the Bill be written in stone and apply to subsequent governments? Is there any guarantee they will not tamper with it?

Manmohan Singh may want to leave with some glory, but he should do it by standing up for the democratic process as is constitutionally established and not under pressure from an unrecognised group.  It is time he gave statesmanship a chance instead of sticking to good old politicking. (He is not seen as such, but that is the Myth of Manmohan Singh: The Follower as Leader I wrote about.) Even the media heroes are making noises about how while Anna is fasting others are having badaam-pista. So? Are these anchors starving?

And for those who have compared this to the Arab Spring, look at these pictures after Muammar Gaddafi’s mansion in Tripoli was destroyed. 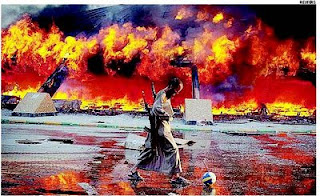 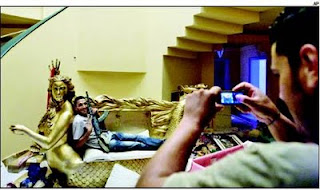 Is this what we want? Or is this already happening without the fire? ‘Rebels’ kicking footballs and posing for pictures with statues?
By Farzana Versey at 10:20:00 pm