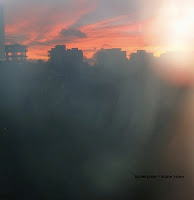 With cucumber pads on my eyes, my head uncovered, nothing to indicate that I was doing ibaadat, I lay down to pray. I do not know many prayers. I depend on memory.

Yesterday was the 27th roza. Except for recollection of days when food was sent to the poor who observe the Ramzan fast, I have nothing to fall back on. It is also a practice to complete the reading of the Quran. For many years someone would read it and the finale would be the last few verses, followed by a fateha. Most of those who read were not supposed to demand money; they got it anyway. One day, I discussed about the purpose it served. The person would be reading by rote, trying to meet a deadline. Even as symbolism this seemed superficial.

It is believed that prayers offered on this day have the efficacy of a thousand prayers. I respect the sentiments of those who believe it because I believe in dreams and illusions.

So when I lay down, I knew it was the right time. Maghrib is special. Dusk comes everyday, but when dusk has a purpose the sun does not just disappear. It leaves a glow.

I had spoken earlier in the day with a friend. She is fasting. She is not religious. As conversation went on, she said, "You know, after a few days of roza you reach a dream-like state, something like sex."

What did I discover?

Cucumber pads on the eyes are soothing.

Lying down and just uttering certain words can produce a sense of numbness – some call it calm.

I smiled when I thought about the conversation with my friend. Did it interrupt the prayer or add to it? Isn’t smiling good?

Hundred was the number I set for myself. I am bad at math.

After completing it, I decided to become corrupt and bribe god. I started in English and then it just sounded better in Urdu/Hindi. I could not decide, so I stuck to the Bollywood ‘Jab We Met’ filmi style. And thought about Kareena Kapoor’s character, who says when you really, actually want something, then you get it.

There are some things I have that I never wanted. Since they had appeared, I tried to make the best of it and gave whatever I could to them. Holding back nothing – not my anger, not my affection, not my cyncism, not my idealism, not myself. After a while, these fossilised and ‘became’ mine. Some people call extra baggage a bonus.

There was a time when I would say to nothing in particular, “May everyone’s wishes come true.” This is stupid. One person’s wish may be to cut the thread and the other may want to sew something. Each removed from the other. So, should we wish for islands?

I don’t know. If there is the sea and a few trees, I suppose this is good enough. I shall write on sand and know that it is not meant to hold my words whether or not the waters lash against it and wash them away.