Is a goat worth the news? The Bansal case 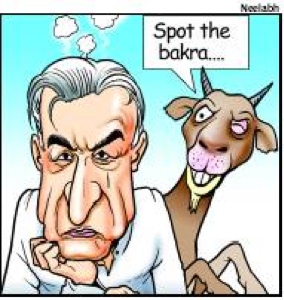 News stories often dumb down the very issues they are exposing. What goes 'viral' is not the news anymore, but every trivia associated with it. Does it act as some sort of cathartic nervous laughter at the end of a tragic tale, scam or mishap?

This would be fine if the main subject was kept in mind or the 'frills' were handled with some perspective.

Pawan Kumar Bansal, the Railways Minister, resigned after the CBI found that his kin ran a “cash-for-postings” racket. A day prior to this, a goat was spotted at his residence. This is what followed, according to a TOI report:

“Pretty soon, channels had astrologers and pundits analyzing the significance of feeding or sacrificing a goat in Hindu mythology, even though it was hardly clear that the goat was being fattened in order to be an offering to the God. There were panel discussions on the many TV channels about the significance of worshiping white goat and black goat in Hindu mythology. Many were of the view that the apparent appeasement of a white goat on an Amawasya day could change the fate of Bansal who was under fire..."

It does not take long before a joke becomes reason for sanctimonious offerings to propitiate our superiority. Every resignation is treated as drama, when it ought to be the done and proper thing, although neither stepping down nor a jail term has dissuaded politicians from resurfacing in a different garb, by their own party or the opponents. There are always loopholes in the morality scheme.

Bansal was not a visible neta, so news has to be exciting enough. The 'nephew' joke could only get this far and no further, for nepotism isn't new to our society in any field. That's where the goat came in and a newspaper report said that even after the sacrifice he could not be saved.

Animal sacrifice is fairly common, but are we really concerned about superstition? Every leader visits places of worship to appease the gods. What about the havans? Mannats at dargahs where so many flowers are 'slaughtered'? The temples where devotees shave off their hair as offering, which results in a business running into lakhs in export of the tresses for wigs and extensions? Does corruption dare to discuss the bribing of gods?

Not only will the bakra droppings take away the meat of the issue, we don't notice something even more vile just around the corner.

In Ranchi, two girls - aged six and four - were taken away for sacrifice.

Munnlal Ram is a constable with the Railway Protection Force (RPF); he is also a tantric.

“The girls were found with their hands tied up. Ram was on the verge of sacrificing them on the altar. Dhanbad police station inspector Akhileshwar Chaubey said, 'Police found nine human skulls in Ram’s house'."

This practice continues in our country. But girls are not goats and don't offer scope for mirth. And that is what news looks for.