Was the Woolwich murder a terror attack? 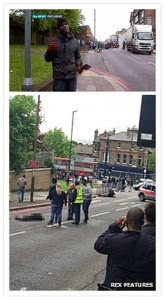 They hacked a soldier to death. What was as bad as the spectacle of TV anchors giving tantalising sound bites about the possible images of the beheading was the surprise over Prime Minister David Cameron cutting short his visit in France and calling for a special meeting. Is this not what a leader would do, especially since he has preempted it as a terror attack?

I watched a bit of the news, and it is inhuman that anyone would want to kill in this manner. Machetes and knives were used, although the two assailants had guns.

What is surprising and unfortunate is that not only did the men kill the soldier who was returning to the barracks in Woolwich, they had an audience. They asked them to film them. They gave statements about their motives.

What did the people do? They shot the video. Some called the police. The cops took 20 minutes to reach. Whatever the problems, could they not have alerted the barracks that were just round the corner and would not the colleagues of the victim arrive to help?

CNN kept showing one of the murdererers. Worse, it said, "They're black." We could see that. Do they ever specify white?

Surprisingly, they stayed around and so did the people. What did that one guy say?

•“We swear by almighty Allah we will never stop fighting you."

•"I apologize that woman had to witness this today but in our lands woman see this every day." [Apparently, a reference to an eyewitness.]

•"Remove your government - they don't care about you."

The obvious assumption would be that he is a jihadi, a religious fanatic. He is also talking about other lands where this happens — it is not clear whether he was referring to western interference or killings by militants within the countries by rebels or fundamentalists against their own people.

When he said "remove your government", who was he addressing? This was in London. There are many different ethnic groups. Muslims cannot remove the government, so it would seem he was appealing to all the citizens.

From the little that one could gather, it looked like the murderers did not choose the specific target. Was the soldier in army fatigues? If so, then they wanted to hit out at the institution they believe is causing trouble in their land of origin.

Has anyone given them the right to speak on behalf of their people? No. They are disgruntled. Perhaps their families or friends or neighbours back home have been killed. This is no excuse, but a possible reason. If they beheaded him, I wonder why they used this form of vengeance against what they believe is bad government.

One innocent man was killed. Besides the killers, others are already making a killing of it. It has started with a warning that this is a terrorist attack, and Al Qaeda is mentioned. Someone suggested that lone operators could not be ignored. Most certainly. But they are called murderers. 'Terrorism' changes the dynamics. The government has already issued warnings of more attacks.

Instead of making the public feel secure, it frightens them.

As expected, Muslims organisations have condemned the attack. This is all very good as a humanitarian gesture, but could they not wait? Why this rush to prove that the community is not to be blamed? It is not. No one blamed Koreans when a student went on a rampage at a university in the US. The apology plays into the media shrillness, and reaches the people. The message gets distorted along the way.

One family is grieving today. They do not even know why this happened. Think about them too, and not only about the killers. That is the job of the police and the investigating agencies. One hopes they are not influenced by the media's bloody-mindedness.

I cannot understand how what takes place miles away lands up at our doorstep. The ridiculous assertions include:

Arabisation of Muslims: What is that? One has to keep repeating that there is no uniform Muslim ethos. The fact that a country is prefixed before Islam while discussing Arabisation makes it clear that there will be ethnic aspects. Even within the Arab world there are different streams.

People from poor countries go to the First World and then behave like country bumpkins: Besides the obvious ignorance, it reveals a superiority complex. This makes no sense considering their own people are on dole, are homeless, are fighting regressive laws.

They “bite the hand that feeds”: What about the majority that are taxpayers, who contribute to these societies? By this logic, the high profile financial scams would also qualify as “biting the hand” because they loot the country’s economy.

MJ Rosenberg, Washington Spectator’s special correspondent on Middle East affairs explained it succinctly: “Most Muslims, like most everyone else, are horrified by London horror. But 100% of Islamohaters are ecstatic.”