A Mirage called Malala: Another Daughter of the East?
by Farzana Versey, CounterPunch, July 15

Had Edward Snowden exposed the dirt of the Taliban, he would have been standing behind the lectern in New York at the UN hall on Friday, July 12.

The contrast, and irony, is stark.


They wanted a cinematic moment. The gooseflesh groupies, including the mainstream media and urban Pakistanis, were not interested in going beyond the script of her address. They became the protectors of a girl who they could not protect in their own country. The legal imperative is not even considered to fight such cases. What bothers them is their pretty position would be threatened and questioned.

If we are to treat her as just a courageous 16-year-old, then perhaps we ought to disregard her role as activist. She cannot be hoisted as a symbol of resistance as a cocooned marionette.

In the very first sentence, Malala said it was an honour to wear a shawl of Benazir Bhutto. This was a political statement. From being a victim of the Taliban, she appears to be a “mind-controlled victim” of the elite. Like Benazir, Malala’s power comes from being wronged. Nobody will deny that they indeed were. However, the dynamics of power play are not about the literal, and this the souvenir dealers do not wish to understand.

When she was being treated at the hospital in Birmingham,  President Asif Ali Zardari visited her wearing a coat with a lapel that had her photograph on it; to honour her, he pledged $10 million for girls’ education to UNESCO because “sending girls to school was the best way to combat extremism”. While Malala’s school in Mingora, in the Northern region of Swat, was renamed after her, the President did not offer this money to a local organisation. To get legitimacy, it would appear the issue has to have global appeal.

The Interior Minister at the time, Rehman Malik, was quoted as saying:

"Until terrorism is over, she will continue to have security until we feel she is OK. You never know the circumstances, what will happen. The Taliban might be zero tomorrow. Still [while] we think or successive government feels she needs security, it is of no issue, to be honest, because she has become the icon of Pakistan, she has stood against terrorists and Taliban and she has become an icon for the education of young girls.”

Why do many Pakistanis refuse to see this as a convenient ploy by the leadership to put the onus on iconoclasm to deal with the issues, knowing well that this would work only as a mirage? Where are the political initiatives to tackle terrorism? Benazir Bhutto too supported the Taliban regime in its initial years to ensure that her position was not threatened. The progressive discourse overlooks the fact that she did not expunge any law that was anti-women.

Ever since she was shot at by the Taliban, the cheerleaders have expressed cursory concern for the “other Malalas”; the sidelight is brought out only as a nervous tic. Malala too made a nodding mention of her friends, now forgotten by everyone. They were also shot at, but not as grievously. Where are they? Are they protected? Any school named after them? No one seems to notice that despite her environment, she managed to learn, to seek peace, and to take on the militants.

The omission of any inspiring contemporary figure in her speech was startling. Yet, she managed to please the activists when she spoke about “hundreds of human rights activists and social workers who are not only speaking for their rights, but who are struggling to achieve their goal of peace, education and equality”.


It would have been politically incorrect for her to add that her sponsors and their allies not only kill civilians in the regions they occupy, but also employ child soldiers. In an earlier piece, I had raised these points: Is this courage or just canny marketing by consumerist consciences? Do we even pause to think about the consequences of creating or supporting such vulnerable ‘revolutionaries’? …Just think of the kids the US forces fought in Iraq and then took them captive to Abu Ghraib. Think about them in the Maoist Army in Nepal, as human shields in India’s Naxal groups, of them in Israel, of stone-pelting Palestinians now holding guns. These are representatives of their countries, not fringe groups.

Malala even sent out a message of forgiveness for the Taliban using time-tested figures:

“I want education for the sons and daughters of the Taliban and all the terrorists and extremists. I do not even hate the Talib who shot me. Even if there was a gun in my hand and he was standing in front of me, I would not shoot him. This is the compassion I have learned from Mohamed, the prophet of mercy, Jesus Christ and Lord Buddha. This is the legacy of change I have inherited from Martin Luther King, Nelson Mandela and Mohammed Ali Jinnah. This is the philosophy of nonviolence that I have learned from Gandhi, Bacha Khan and Mother Teresa.”

This is what Barack Obama says. This is exactly what the West, specifically the US, has done with its neat division of good Talib, bad Talib. Besides, as America is due to exit from Afghanistan in 2014, it will have to deal with the Tehrik-i-Taliban Pakistan (TTP). Whoever drafted Malala’s speech was taking no chances, even carefully omitting Hinduism, aware that it is a touchy issue in Pakistan where the infidel is associated with the idol-worshipping faith more than any other.

Besides, what change did Jinnah bring about? His major contribution was before the Partition and in helping to formulate the idea of Pakistan. He did not live to watch it veer away from the avowed secularism he hoped for. Malala recalling Mandela and Gandhi seems like a staple politician-beauty pageant fortune cookie moment, but Bacha Khan? He did not want to be with Pakistan and had specified that he should be buried in Afghanistan, to retain the purity of his Pashtun dream. Violence of thought is not something to be shrugged off.

Who is educating whom?

Like the caricature of the Taliban frightened of a girl with a book is simplistic, the catchphrase at the UN that day –‘Education First’ – is restrictive, especially when you consider the number of school dropouts in the West. But American kids willingly emptied their kitties for a charity that turned out to not only misuse the funds, but also mislead. Greg Mortenson, a Nobel Peace Prize nominee, who wrote the bestselling ‘Three Cups of Tea: One Man’s Mission to Promote Peace ... One School at a Time’ set up the Central Asia Institute charity that funds schools in the Balti region. President Obama made a handsome donation, and the book compulsory reading for the forces in Af-Pak.

However, the greater crime, as I wrote in the Counterpunch article Fabricated Philanthropy was “one by default – of whitewashing the image of the US administration, even if to a small degree. It has come to light that he was not kidnapped by the Taliban. In one of the photographs of 1996, his so-called kidnapper turns out to be Mansur Khan Mahsud, a research director of the FATA Research Center.”

Those who oppose religious factionalism that the Taliban propagates have been using religious arguments against militancy. Certain clerics had issued a fatwa against those who targeted the girls; the liberals did not know how to negotiate this similarity. Pakistanis have lived with their Islamic laws, so they cannot ignore the mullahs. 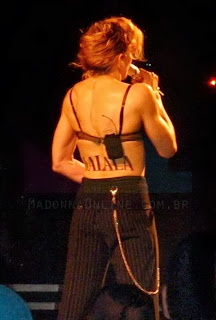 Such lounge activists do not take on the Taliban or the government. They merely participate in the usual candlelight vigils and sex up the debate with their passive-aggressive act. Quite reminiscent of what Madonna did soon after Malala became a talking point. At a concert in Los Angeles, the singer had said, “This made me cry. The 14-year-old schoolgirl who wrote a blog about going to school. The Taliban stopped her bus and shot her. Do you realize how sick that is?” As reported: “Later in the show, Madonna performed a striptease, during which she turned her back to the audience to reveal the name ‘Malala’ stenciled across it.”

When Malala mentioned the problem of child labour, it did not strike her that she is now even more a victim of it, albeit in the sanitised environs of an acceptable intellectual striptease.

Do read Our Guns, Children's Shoulders
By Farzana Versey at 11:42:00 pm