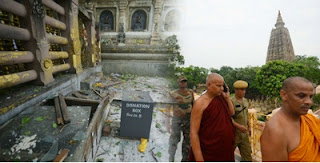 The Dalai Lama laughed a short laugh. Then, he said such small small things happen...few individuals are involved.

He was asked to respond to the bomb blasts in Bodh Gaya, Bihar. On Sunday evening I tuned in to Headlines Today. It had been over 12 hours since the attack in the early hours. The reporters had reached there. The verdict, however, was out way before that. We'll get there.

First, let me tell you about this amazing reportage. A Nepali woman and a Bhutanese man were being interviewed, and the questions contained the answer. Essentially, that this was bound to happen, there was not enough security. There was such a barrage of implication in the queries, with the emphasis on "the seat of Buddhism...of peace and tolerance", that the woman was forced to say, "What harm has the Buddha done?"

And later it was the Dalai Lama who laughed. He is the head of the Buddhist community the world over. But, apparently, our news anchors and TV reporters are the holinesses.

Politicians are playing politics, resulting in terror tourism, and we are not talking about the recce by the culprits. Most senior leaders have visited or are planning a visit, mainly to score points.

In his enthusiasm to not jump the gun over the Indian Mujahideen, one of the main suspect organisations, the Congress Party's Digvijaya Singh got tangled in a web:

If he does not know, then he ought to keep quiet. Instead, he gave a lecture to the opposition:

"BJP also gave statements linking the persecution of Muslims in Myanmar to this incident. They are clearly targeting Muslims and I want to say to all that for god's sake, let the NIA complete the investigation."

He was repeating what has been implied and stated by the usual suspects. Even if the Myanmar angle turns out to be true, on what basis should this permit "targeting Muslims"?

There is absolutely no reason and basis for any such acts to be committed anywhere in the world. Terrorists, of extremist organisations as well as establishment machinery, have no business to target innocent people. However, 'civil society' has taken on the mantle of mimicking the attitude it abhors by using language as a tool. The hate speech and insinuations, quoting from ancient religious texts, seems to have become a lucrative pastime. Therefore, it is not surprising that the verdict was pronounced.

It gets more people to salivate than discussing the security lapses. If agencies send warnings, why are necessary precautions not taken? Are most such warnings red herrings or the result of paranoia?

To specifically talk about the Maha Bodhi temple, the statue of Buddha was not damaged. The terrorists used low intensity bombs during a time when few people would be there. Two monks were unfortunately injured, one seriously.

What message were the terrorists trying to convey, given that they are usually clear about their intent?

Sushma Swaraj said, "India is the land of the Buddha. We will not allow a Bamiyan here."

It is a good sentiment. One hopes that at least in contemporary times Buddhists, and not only Tibetans, are in safe hands. It wasn't so in the past, the same past that the Hindutva parties love. This quote might put things in perspective:

“According to the historian S. R. Goyal, the decline of Buddhism in India is the result of the hostility of the Hindu priestly caste of Brahmins. The Hindu Saivite ruler Shashanka of Gauda (590–626) destroyed the Buddhist images and Bo Tree, under which Siddhartha Gautama is said to have achieved enlightenment. Pusyamitra Sunga (185 BC to 151 BC) was hostile to Buddhism, he burned Sūtras, Buddhists shrines and massacred monks. With the surge of Hindu philosophers like Adi Shankara, along with Madhvacharya and Ramanuja, three leaders in the revival of Hindu philosophy, Buddhism started to fade out rapidly from the landscape of India."

And it isn't all quite a nice scene that it is made out to be. This is beyond politics and recent. Buddhist monks have been demanding control over the Bodh Gaya shrine against the Hindu majority in the managing committee as per the Bodhgaya Temple Act, 1949. They had to take the matter up with the Supreme Court.

More from this report:

"The Gaya district magistrate is the ex officio chairman of the panel while other members are nominated. What has been deemed ultra vires of the Constitution by many legal experts is a provision that empowers the state government to nominate a Hindu as the chairman of the committee if the DM of Gaya is not a Hindu."

There is a Shiva temple within the precinct, which seemed to give it some legitimacy. How it got there is a different matter.

"Buddhist monks have gone on indefinite hunger strikes demanding that the community be handed over control of the shrine. NCM had passed a unanimous resolution in 2005 that the Act needs to be amended. However the demand for full control has never cut much ice."

So much for concern for Buddhists. Meanwhile, the latest news is that no one has been arrested. Indeed, this ought to be news too. In October, Delhi Police had handed over information. On July 3, a DIG reviewed security with local administration. It is impossible for any security to be foolproof, but if 10 of 13 bombs go off within a small radius, should not the government be more transparent?

"Arresting anyone in a hurry is not right. Investigations should go into detail and catch hold of the real culprits...There are so many complex problems. Infiltration from other countries is there, Naxalites are there, local communal disturbances are there. We have to see all angles."

He was asked about the Naxal angle. The infiltration problem is a concern always. As regards communal disturbances, I hope he and everyone realises there are more than two communities in India.

And in what has become a mandatory requirement, Muslim organisations in Mumbai have condemned the blasts. I dislike this defensiveness. One day, though, peace-loving Buddhists too will speak out against the killing of Muslims in Myanmar. They constitute five per cent of the population.

Until then, politicians can continue to run our lives and protect places of worship. They are the new gods feeding hate.

"Holding on to anger is like grasping a hot coal with the intent of throwing it at someone else; you are the one who gets burned." (The Buddha)