Food for politics: a restaurant and a hug 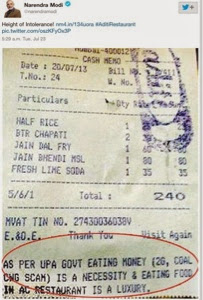 Does anyone remember those Irani restaurants in Mumbai that had eccentric notes put up — no combing hair near wash basin, no loud chatter, and no talking politics?

The first seemed the prerogative of the owners, the second as a consideration for other diners, and the last must have been the result of some bad experience in the past. Or, perhaps the owners truly believed that eating and politics together are bad for the stomach. It is also possible that they had strong opinions and did not relish the idea that some contrary views would be expressed, leading to a 'rebel clientele'.

Likewise, when I eat out and check the bill, the last thing I want is the owner to give me political bhaashan, while cribbing about taxes. Even the grocery stores did not do so due to the LBT taxes. They went on strike. The humble vegetable vendor has no recourse and has to put up with haggling.

On Tuesday, a small eatery made news for its bill that had these words: “As per UPA govt eating money (2G, coal, CWG scam) is a necessity and eating food in AC restaurants is a luxury.”

Aditi Restaurant in Parel was forced to shut down by Congress workers for this "defamation". There is anger and there is mirth.

And with these two emotions, there seems to be no room for people breathing heavy about freedom of expression to ask:

• Who made this bill public and why?

• What are the political affiliations, if any, of the owners?

• Do customers have a right to protest against political and social messages at a place where they pay for the services?

• The bill has no tax visible. How much is it fattening the cost of the meal under the guise of taxation and keeping a bit for itself?

• Are customers of various products and services, who have chosen to pay up the extra amount, willing to put up with such a rant?

What made Narendra Modi jump in? Why was he concerned about a little eating place when he has shown scant regard for worse?

The desperation of the BJP is such that it raised the matter in the state assembly: "This is shocking. The ruling party does not want to give the people right to protest against their scams. Why is the Congress so intolerant?"

The Congress is intolerant. These scams are real. The ministers have been arrested and spent time in jail; some got away. We have courts, even if we may not agree with the verdicts. We have the Right to Information.

The restaurant owner has every right to protest against scams when there are protest rallies or through other means. He has no business sneaking in political messages only to complain about taxes. In fact, he has no business passing on his tax worries on the customer, unless a customer specifically asks him about an inflated bill.

"The Indian Hotel and Restaurant Association (AHAR) sources said that Aditi restaurant mostly caters to poor people coming to hospitals in the area, so there were complaints about high billing due to taxes. The owner, they said, had given expression to those complaints through a footnote in the bill."

This is lame. It is an aircondioned restaurant and the tax is specifically for AC ones. How many poor people visit such places? Would those coming from hospitals be bothered? And why should anyone? They do not know in advance what to expect and only later does the message hit home while paying.

What if instead of Congress goons a visitor had protested? Some can get rowdy. Would it have made news? Perhaps. If the owner had the instinct to smell an opportunity. On the day it was shut (it reopened on Tuesday) people had already been passing around the menu, planning home delivery and later it made it to their wish list.

The episode shows that anybody can print bills with a message and get instant popularity and martyrdom.

One report in The Times of India sourced its news story from social networks. It was painful to read this:

"Some took up the communal angle. It wouldn’t have been attacked had it been an Italian or a 'Muslim-owned restaurant serving ‘secular’ food', said marketing manager Jayesh Dewana, adding that the reason it had been shut was that it served 'Hindu, pure vegetarian' fare."

Unfortunate as it is, I am sure this is not an isolated opinion. What is secular food? How many vegetarian places have been shut down? Does a restaurant have a religion?

These are people fighting for freedom? Look at how chained they are. They are the ones who run down 'Muslim' eateries for their choice of fare and assume it is some Arabisation plot. These are the ignorant who do not know that in this same city such places were destroyed in the riots of 1993.

So, let us ask some questions:

1. Would Shri Narendra Modi's men permit Muslim-owned restaurants in Gujarat to have a message against 2002 riots on the bill?

2. Would an eatery in Chhatisgarh get away by announcing it sympathises with Maoist ideology?

3. Would a Sikh at his dhabha be able to seek the support of customers to petition against Sajjan Kumar?

You know the answer.

And despite my empathy for all the above, I would not like it. I am going to eat, not be saddled with problems, even though I am more than aware of them.

This would amount to misusing a client's space and proselytising.

Don't 'charge' me for it. Hand me a pamphlet separately, if you must.

This overarching culture of protest that is gaining currency to "reach millions" through short sentences is hot air. Those protesting against the shutdown of a restaurant are usually silent when people are rounded up on 'suspicion' for crimes they never commit. It is so easy to take up the cause of safe underdogs. 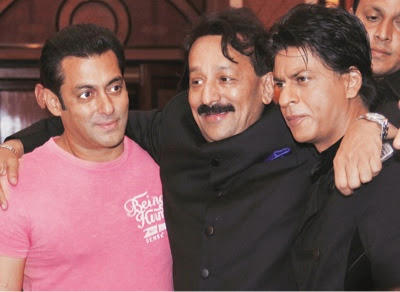 On Sunday, at an Iftaar organised by MLA Baba Siddiqui a rather normal greeting became an 'epic moment'. Two Bollywood biggies, reportedly not the best of friends, embraced. Salman Khan and Shahrukh Khan made it to the front page of some mainstream newspapers.

I watched one such barf-inducing clip on TV two days later. This nonsense was still being talked about. Realising how important this was, the host called out to the photographers to capture it.

My views on political iftaars are not new. I abhor them. Worse, this one was at a five-star hotel. What sort of austerity is it? Then to make it into a photo-op. I was shocked when the host, obviously on asked how he felt, said he had nothing to do with it. It was all Allah, he was merely a means. I would like to know why, in that case, Allah did not intervene when they had that big fight.