Tooth vs. Dentures: The Modi Bite 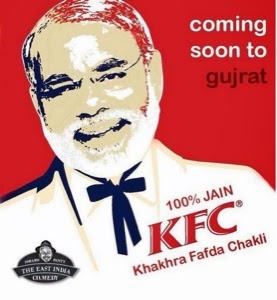 How do you deal with the hype? The answer is simple: You don't. It is already reaching saturation point. Having 7,200 "e-soldiers" is a sign of desperation. The Gujarat chief minister is looking for someone to head the minority cell, "but the BJP is finding it difficult to find a recognizable face to head its minority front in Gujarat". His soldiers who think the 2002 riots are old and it is time to 'move on' will never have the courage to come forth with a plea that Muslims need not vote for the party. If they did, then one might give them some credit for at least lack of hypocrisy regarding their persistent whining against vote bank politics.

I am often surprised at the naïveté of those who believe that the cyber world can win elections. This report in The Times of India gives us a few details about how it works:

"Try criticizing Gujarat CM Narendra Modi on social media and you will be ambushed by a cyber army. Praise him, and there will be hundreds joining the chorus...The sharp quips against Modi-baiters on the net are the coordinated effort of these youth, who use specialized software to add friends and ‘Likes’ to Modi pages on Facebook and Twitter and also send mass messages."

Getting urban youth is not difficult. Modi should give credit for this to Anna Hazare. His crusade brought out the Nike generation to embrace the Gandhi topi in the day and drown their new-found angst later in the usual haunts. Nothing has changed, except a new-found purpose that I have already talked about in the I Mislead India post.

So, he had a ready 'army', and it was not difficult to brainwash them into believing that all would be right and what was wrong was not the fault of Modi, but of those who were out to demonise him. The youth who were shouting for justice against rapists and scamsters have been silenced into believing in legalistic justice where foot soldiers take the blame and you need 'concrete evidence' to pin down leaders The dissent that they proudly claimed has been bought with a fake ideology. The recent history they are asked to forget is dragging them to the ancient past of Mughal conquerors. Irony cringes.

The group is incestuous and sharp, though. They will target novices with no known baggage. Try a red herring (RH) with them. They will not bite. The fear factor they use against others is really their own fear of any strong opinion. Watch them on TV shows and the moment they face an argument, the response is, "Look at you, you are getting nervous", even as they muffle their own nervous laughter. They cannot handle anyone who has a contrary viewpoint.

I have not come across a single person who is a Modi or a BJP person being critical of the way of functioning (no, L.K.Advani does not count!). If they cannot question anything, then how will they critique others? How different is it from the dynasty they abhor? It was this Narendra Modi Army that took out a morcha to Mr. Advani's house after he spoke out. Forget cohesiveness, it reveals bad taste and insecurity.

The electronic media has given way too much attention to these "Internet warriors". The unfortunate negative fallout is a response by the Congress camp of mimicking it. It ought not to be difficult. Prop up one individual, discuss achievements, rubbish the opposition. However, they have not been as successful. If the relatively secular forces (not just the Congress) have any sense they'd see that as a compliment,

They have a wider variety of supporters, not all creditable, but yet. They are not in denial mode about any of the riots during Congress rule. They are not in a desperate hurry to accept the words of disgruntled NDA allies, even if some politicians do. A Digvijaya Singh, a Sanjay Jha, an Abhishek Singhvi are often pulled up by their own even as they remain anti-BJP. One does not ever hear about any Modi bhakt criticising their spokespersons for speaking out of turn and, by Jove, they do.

In the superficial oneupmanship, where it is clear that the Modi army outnumbers, it is the loss of sensible debate.

Contrary to what the social media believes about the social media clout of the man, a war cannot be fought with invisible weapons and hydra- headed monsters with multiple accounts. This is an insult to the vast population of India. And it ought to be a lesson for every political party.

Ruling a country is not a hashtag you can latch on to. You can fool a few lakh followers — many talking to themselves — but not the millions.