The BJP seems to be in a mulligatawny soup, and that is as English as you can get.

India's literacy is not something to be proud of, so questions about language are less about parochialism than about power.

"English language has caused a great lot of loss to India. We have started forgetting our religion and culture these days. There are only 14,000 people left in this country speaking in Sanskrit. Knowledge acquired out of English is not harmful but the anglicization penetrated into youths in this country is dangerous."

What religion is he talking about? Do believers forget a religion only because they speak a language that the scriptures were not originally written in? Nobody quite knows what the good angels, apostles and sages conveyed via unknown means that today form holy texts. These are available in translation in regions where they are not even the prominent faith. It is part proselytisation, part academic interest.

In India, many religions are practised and many more languages spoken. Is the BJP, under the guise of lamenting for a language, merely pushing a faith agenda?

Then, we come to the issue of culture. Culture is lived experiences as much as what society might deem to be 'cultural aspects', in terms of heritage and creation of indigenous ethnic art and mores. People imbibe these and add to them along the way. There is no single culture that can be forgotten or remembered. What we broadly term "Bharatiya sanskriti" (Indian culture) is an amorphous entity made up of all of these.

I do agree with Rajnath Singh, though, on the point about anglicisation. It is not dangerous — we do know of the dangers from non-English speaking Indians only too well — but it is limiting. However, bringing in Sanskrit here is tactical. To revive a dying language is one thing, to use is as a political tool quite another. It is part of the reclaiming our heritage agenda that is always kept on the burner. This is dangerous.

Of the 14,000 people who speak in Sanskrit, how many consider it their primary language? Do they use it in personal and professional interaction, assuming their profession is not propagation or teaching of Sanskrit?

Should the BJP not helm this movement and promote Sanskrit among its target audience? Give electoral tickets only to those who have some knowledge of Sanskrit. Start a poster campaign in Sanskrit. Use it to at least begin their meetings.

We know this is only to rake up some cultural issue as a preemptive election strike. Oddly enough, it will not alienate the acolytes, who know no language other than English, because they are being sold a dream, and dreams come cheap.

RSS chief Mohan Bhagwat had gone on to say the situation under Congress was worse than British rule (my full post here):

English is as much a foreign language as Hindi is to someone from a region not much exposed to it, as South Indian languages are to those in the North, the East...we can go on about these languages that people speak today and not in the past.

Having said this, I do believe that we are losing pride in our languages and look upon English speakers as superior. There is a neat divide between the English speakers and those who use regional languages, and this is manifested in almost every aspect. The hierarchy should bother us, and I say this even as I write in English and am more comfortable in it than with other languages that I do know and some I try to understand.

However, in diplomatic discourse I think a unifying language helps a country like India. Japan and China are supremely confident and get away with it. We might not, and unfortunately when we use an international platform with Hindi it is tom-tommed as something special, instead of the most natural thing. 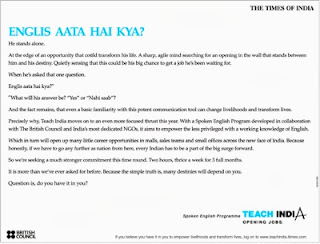 This reminds me of The Times of India’s Teach India campaign I had mentioned earlier. Look at their promo. Why would someone ask “Englis aata hai kya?” and make a kid feel awkward? Does that person not know how to pronounce ‘English’?

I also don’t understand how a boy at the edge of opportunity will look for open spaces in walls. If he is at the edge, it would be a mountain or a ledge. Where do walls come in?

And all this is to get a working knowledge of English to open up “many little career opportunities” and help in the “surge forward”.

That’s really kind. No big opportunities for the little people, and are we not surprised that this would be a surge forward and not backward?

In a debate, there is always room for some lighthearted moments. Madhu Kishwar had written in a piece: “The brown sahibs of today have made English their language for love making, talking to their infants and even scolding their pet dogs!"

I had no idea that infants could understand languages they were cooed in. And would dogs get a superiority complex only because they were scolded in English? Would an ordinary mongrel acquire a pedigreed halo if told to shut up, instead of "shanti"?

What language does love-making have? It is touch. It is visual and olfactory as well. Does moaning have a language? Yes, some words are used, but would it alter the intimacy if they were whispered in another language from the one the two people are at ease with?

For those who do wish to revive Sanskrit, I offer you two words that might help: 'siddha', achieving, could be used for climax; if the experience is overwhelming, you would be in a state of 'samadhi'.

Try it and tell me how it was!