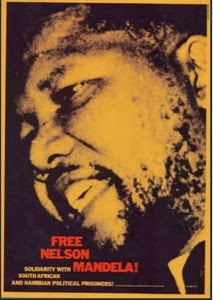 Everybody wants to claim Nelson Mandela. India has appropriated that right with its most bankable crutch: Mahatma Gandhi. Mandela, who fought against apartheid, was imprisoned for 27 years, is seen in India as the man inspired by Gandhi.

Of course, he expressed admiration. Yes, Gandhi was thrown out of a train in South Africa. But their lives and politics were vastly different.

That ought to not even be a point right now. Just as quoting Barack Obama on Mandela, except as an obituary, makes no sense. Mandela was the product of a violent struggle in his lifetime and was called a terrorist. He did not initiate a war on terror, he did not live to send drones to other countries.

In his own words: "Armed struggle must be a movement intended to hit at the symbols of oppression and not to slaughter human beings."

He was not a traditional pacifist when it mattered. As he said, "During the times of tensions, it is not the talented people who excel, who come to the top, it is the extremists who shout slogans."

In the rush to pay tributes, people don't seem to realise that they are conveying something entirely different from what they intend to say, simply because they are saying it badly.

Take this ad for a dairy product company. 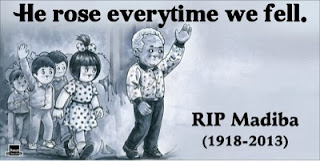 It has sensibly not put in a reference to its butter. But, how exactly did Nelson Mandela rise each time we fell? Who are the 'we' represented here?

This does not even sound complimentary; rather, it is an insult. Did Mandela rise when others faltered? Does it mean that his whole struggle was about such flawed behavior on the part of the rest instead of a fight for what he believed in?

There is a quote by Confucius, which seems to have inspired the ad:

"Our greatest glory is not in never falling, but in rising every time we fall."

Mandela did not give up despite the incarceration. It was his glory, his achievement. He did not wait and watch for others to fall so that he could rise.

In fact, prior to the 1994 elections, he said: "If there is anything I am conscious about, it is not to frighten the minorities, especially the white minority. We are not going to live as fat cats."