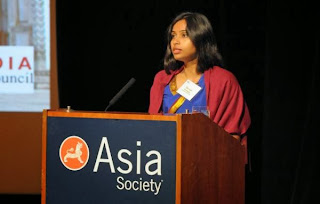 Is America humiliating India by riding on the case of a maid? Sounds illogical, but if true then it is bizarre.

The incident in short: Devyani Khobragade, Indian deputy consul general in New York, was arrested for falsifying details on the visa of her domestic help Sangeeta Richard. She was strip-searched, handcuffed, had her DNA swab taken and was put in a lock-up with drug addicts.

The Indian media and politicians have gone into hyperbolic mode that, in fact, is derogatory towards the country’s honour they are seeking to uphold. For example, one headline spoke about “Strip search shows India’s spine.” A minister said, “India can’t be treated like a banana republic.”

Every major political party has spoken out, with one vital difference: they are promoting their own agendas. It has little or nothing to do with electoral gains, for Indians really do not care about the nitty-gritty of who represents them abroad or at home. However, it most certainly helps to push ideologies, whether it is making a reference to the diplomat’s Dalit background, or asking for gay American diplomats to be sent back home by a rightwing member, or the ruling party standing up as one of the largest democracies against the might of the other largest democracy. Add to this a mish-mish of others who want to give a befitting reply to America’s arrogance to prove their feeble patriotism.

Posters too convey a feudal attitude of a bigger role as big brother that ought to protect our sisters.

It is shameful to read about a tit-for-tat policy when we are discussing diplomacy. An unconditional apology is perhaps in order, but the US refuses because it reasons it is about their laws.

"In his conversation with Menon, he expressed his regret, as well as his concern that we not allow this unfortunate public issue to hurt our close and vital relationship with India...The secretary understands very deeply the importance of enforcing our laws and protecting victims, and, like all officials in positions of responsibility inside the US. government, expects that laws will be followed by everyone here in our country.”


This is too vague and obvious that the response is not to the treatment but a reaction to public protests in India.

"We have put in motion what we believe would be an effective way of addressing the issue but also (put) in motion such steps that need to be taken to protect her dignity.”


While granting her immunity makes sense, how does not meeting American delegates help serve her dignity? The western media and authorities are not terribly concerned with this issue.

With regard to withdrawing identity cards of US officials that allowed them special privileges over those they were entitled to, it should have been done long ago. Now it appears as though bruised egos are doing the talking. The US consulate and other staff have had many privileges and are afforded protection way above the norm. This reveals a lot about us, and a little about them. For a nation that does not have a history such as ours, where the pecking order is more glaring, its staff overseas seems to quite relish being treated like big saabs, not unlike the colonisers of the British Raj.

India has held its own at least at the level of détente, which is where it matters most. There is no need to behave in a churlish fashion now. Instead of these ‘withdrawal’ measures, would we have the courage to nix the nuclear deal with the US, have an embargo on trade relations, put strictures over fly zone and refueling, a cap over foreign investments, and mandatory surveillance of American companies and consulate offices by Indian agencies? This would be real talking.

Having said this, I do not think any of this is necessary only as a response to Ms. Khobragade. This case should be dealt with between two offices and not two countries. The international agency and labour commission has to look into it.

We have lost all sense of proportion, and failed to notice that the US picked on a mid-level diplomat, and not a high-ranking official. It is also curious why the US arranged for the maid’s family to visit just two days before the arrest of the diplomat. There is a suggestion that this was part of some plan. Why would the American government want to do so? There are strict procedures for immigrations, and if Sangeeta Richard is being given special treatment only because she did not get the salary as per minimum wages, then it might be prudent to ask just how many in the US do.

The helper escaped; her employer got a call asking for money; she complained about the disappearance and extortion; India alerted the counterparts in the US. Nothing happened. Instead, the employer got arrested.

The major issue is the indignity she underwent. It is indeed shocking and rather unusual. What were the authorities going to find after a strip search, a cavity search and a DNA swab? It makes no sense.

If the concern about malpractice, then what about the malpractice of the help seeking employment, which one understands is common practice?

Following the detention of Ms. Khobragade, a report stated:

“Many officials, who have faced such situations, say maids who allege human trafficking, sexual abuse by employers etc have an easier route to obtaining the coveted green cards for them and their families. For this, they are assisted by a veritable army of NGOs and lawyers. Officials said on condition of anonymity that sometimes maids etc are lured by attractive offers from resident NRIs.”

It brings us back to the question: what exactly is the US thinking? At a pinch, it looks like America wants to appear egalitarian towards what is the working class. Although this has not got much publicity, it will convey a message in-house. There has been discussion about minimum wages as opposed to what the domestic staff would earn in India. The expenses are higher in the US, even if board and lodge are taken care of.

It is important to note here that diplomatic staff, and even those of multinational companies, working in India are provided a ‘hardship allowance’, apparently to tide over the hardships they might face in a less developed country, quite forgetting that the dollar goes a long way here. As for the terrible state, they occupy the best real estate and are the toast of big business and the glamour world. They are on the socialite’s wish list all year round, and as they live in the metros there is hardly any reason to complain. If anything, they get far more attention than they would at home. The policy of “reciprocity” will not affect many socially, if we understand the Indian mindset.

The issue has to go beyond removing protective barricades. For those gloating that India is taking a firm stand, let us not fool ourselves.

Playing on anti-American sentiment will cut no ice, because the US has survived it and thrives on it. Count the nations that are against American policies and you will get the picture. Yet, it is American forces that land up to save beleaguered countries, and let us not get into the pragmatic position or even the ethical one here. Or, shall we use the word of currency now – malpractice?