India loves cows, the temple variety not the ones left with festering wounds to forage in garbage dumps. The new government is serious about cow protection. As I said, we love cows, some worship them.

So, when a cow knocks on the door of an elite space club should it be considered insulting? According to the Indian worldview, the cow should have the right to be there, was in fact born to be there. Why, then, did some demand an apology from the New York Times for this cartoon in response to the Mars Orbiter Mission? 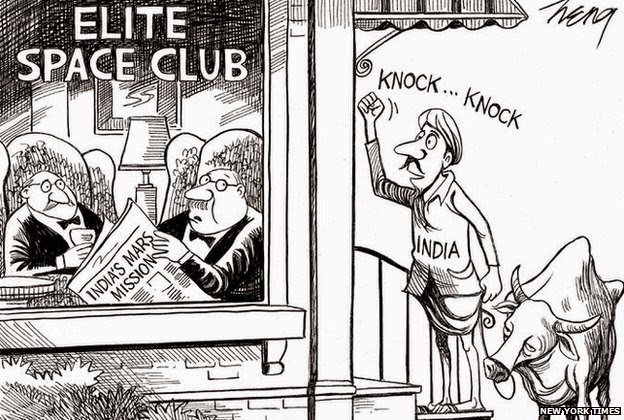 Do we consider the farmer and the beast any less when compared with our space missions? If so, then this is cause for serious concern. India is largely a rural country and agriculture continues to be its mainstay. How does it convey the image of a backward society when this is what feeds us as well as a few importing countries?

The farmer is not being obsequious about entering the elite club; he is assertive. The cow too is rather saucy and sanguine. It is the westerners reading the news who seem to be worried and shocked. They look backward because they have not come out of their cocoons to keep in touch with the world to see how far others have progressed, far enough for India to be the only one to succeed in its Mars Mission at the first attempt.

We anoint a scientific operation with a Sanskritised, almost mythified, name like Mangalyaan, we pretty much treat it as some sort of divine intervention, and then we project our insecurities on others. Strangely, I hear that Malayalis objected to it most on social media because many of ISRO’s scientists are Malayali. What does this tell us about our parochialism? It is natural to feel proud of one’s own, but let us not see a slight where there seems to be none.

The farmer and the cow are as much images of India as the camel and the bedouin are of the Middle East, in fact more so. It does not mean we have nothing else. If anything, this is a paean to the India of the majority – the villager. It is true that the farmer did not send the mission into space but scientists may come from rural backgrounds. Have we forgotten the euphoria upon the success of the mission? The most telling picture was of women scientists with flowers in their hair jubilating. 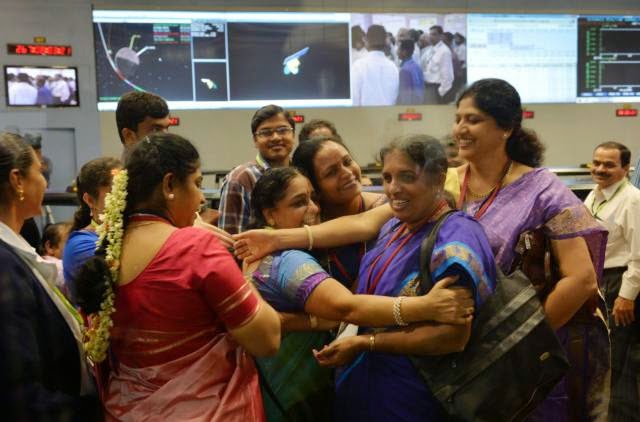 If we have a problem with the cartoon, then why not with this impression of what is Indian womanhood from a certain perspective? That too is a stereotype, where the lab-coat is seen as elite privilege.

“The intent of the cartoonist, Heng Kim Song, was to highlight how space exploration is no longer the exclusive domain of rich, Western countries. Mr Heng, who is based in Singapore, uses images and text - often in a provocative way - to make observations about international affairs. We apologise to readers who were offended by the choice of images in this cartoon.” He further added that the cartoonist “was in no way trying to impugn India, its government or its citizens”.


India is too vast; the people are too many and disparate. That leaves the government. This mission did not happen overnight after Narendra Modi came to power, so it is not the success of the present government at all. But I see this more as NYT trying to still play host to the PM after his NRI-slavering visit. The Indian authorities might see in this censorship of a kind an opportunity to use as precedent whenever we are faced with some truth even if it is not, or should not be, inconvenient.

We’ve got the apology from NYT (and it is always great to see NYT apologise, for different reasons), but are we going to hide the farmers from us? Will cows be placed on pedestals behind walls? Why can’t we own up to what is ours?
By Farzana Versey at 7:43:00 pm