Will Ramdev Join The SlutWalk? 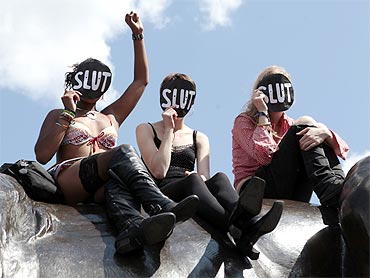 I’d like to know how many of these women who are promoting the SlutWalk in India are bothered about sluts. Spend a day as a slut, a whore, a sex worker and then tell us what it feels like to be called a slut after servicing upto ten men in a tiny cubicle behind a dirty curtain. Yes, you want to bring awareness to India, then don’t ride on the name of a group of women who don’t wear masks or carry placards saying they are sluts. For them it is bloody work and the only means of earning. And most of them do not dress up in fancy dress even when they have to lure men for their keep.

Some of them should get together and protest against this group of pampered pop activists and prick their bubble.

Women, feminists and others, have been writing about their bodies, about sexual exploitation, about objectification. So, why is the SlutWalk being heralded as something that has finally arrived in India, like some colonial hangover after a rave party?

I thought I’d give this major happening a pass because what does it say that one has not said before? But the people responsible and those opposed are gearing up for it. To sufficiently localise it, they have added ‘besharmi morcha’ to the terminology. What does it convey? That, yeah, we are shameless and so what?

Someone said, oh, cut out the crap about rural women, as long as it works for some. It works for the very people who already don’t give a damn, will dress as they wish at their lounge parties and ask for “Orgasm on the beach’ from a bartender who has seen more cleavages than cognac bottles. It will work for the teen brigade that is looking for a heart-stopping, heavy-breathing cause that is in your face but does not need much work. It will work for a certain kind of feminist who is discovering her ‘ism’ and a walk won’t hurt.

It is true that women are often derided for what they wear, but it is disturbing to see westernised clothing as representative. What about hipster sarees and backless cholis? How many of the girls/women will be dressed in everyday clothes and not hot pants and short skirts? Because this is making it into a garment association and women are objectified even in the workplace not because of what they wear but who they are – talented, confident and achievers. Their achievement is stimulus enough to taunt them.

The SlutWalk is not only about rape, but while Bollywood films of the 80s often had courtroom scenes where a lawyer raised sexist questions, art-house cinema has not been much different – what about ‘Bawandar’ that was based on the Bhanwari Devi gang-rape case? The protagonist was asked: “Were you wet?” She had her ‘odhni’ covering her, but her head was not lowered. Finally she said, looking straight into his eyes, in her dialect, “A woman gets wet when she is intimate out of choice, but when it is forced on her she bleeds.”

Do the Dilli billis know about these aspects? How grounded are they in such real issues and what about the already educated men in the BMWs who commit date rape? What about marital rape and the silence of emotional rape?

Now we have Baba Ramdev who has made the accusation that the cops had plans to rape his female supporters at the Ramlila grounds rally. It is pretty disgusting the way women are used all around. There are several cases where such things happen, but in an open ground with the ruling party watching and seeking electoral brownie points? Isn’t it surprising then that he chose to dress as a woman to escape? Has he ever commented on the Nityanand type swamis and their antics captured on camera? Or the godman who sold pornographic CDs of young boys and girls against the exotic backdrop of the Varanasi ghats and of his wife too with deity pictures in the background? Does Baba have anything to say about these?

The Slutwalk is a minor tic, but today when everyone wants to be a concerned citizen, it could turn into a movement. I won’t be surprised if some media group joins in to sponsor the event. After all, we do have beauty pageants that already flaunt the female body as an example of empowerment. The ramp is the precursor of the SlutWalk. No one calls it ‘besharmi’ because these girls are trained by ‘experts’ and Mother Teresa protégées in diction and clichés. They speak up for causes ranging from global warming to education. Not one of them has spoken up for the real slut. The whore. The sex worker. The woman who works by getting fucked. Really.

If on the appointed day they can walk and show solidarity for those women, then these hawks can tawk.